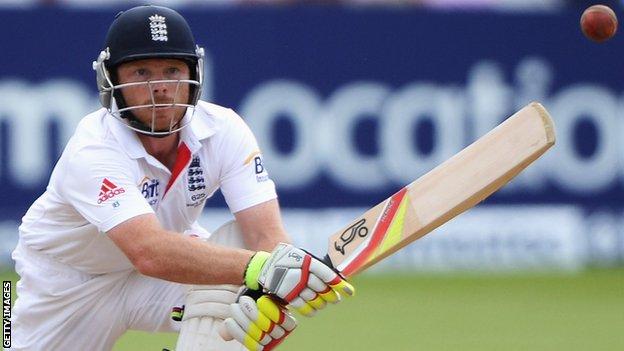 England's Ian Bell is enjoying his run of good scores in the Ashes after a difficult start against Australia.

The batsman scored just 171 in 10 innings in England's 2005 series victory and was nicknamed 'The Sherminator' by Shane Warne.

Bell, 31, has scored a century in his last three Ashes Tests and he wants to wrap up a series win at Old Trafford.

"I feel pretty confident right now and it is good to be putting it together in an Ashes series," he said.

Who was the Sherminator?

Australia spinner Shane Warne was heard on stump microphones referring to Bell by the moniker.

Warne said to Bell: "You don't like being called The Sherminator do you?" Bell responded: "I've been called worse."

Bell's hundred in the first Test at Trent Bridge was pivotal to England securing a narrow victory which he followed up with the highest score of England's first innings at Lord's.

It's a big turnaround for the Warwickshire batsman, who averaged just 32 in his first 18 Tests against Australia and had the unfortunate Sherminator nickname after the unpopular geek from the American Pie films.

"From my first couple of (Ashes) series I knew I had to improve on that," Bell said.

"The (Australian) team I started against was pretty good, so it is nice to be putting my hand up now as a senior player when we've needed it.

"I don't really feel too bad about the previous series but it is nice to be able to do things when the team need it most and scoring hundreds is what you want to do.

"To have three now against Australia is exactly where I want to be."

Old Trafford has also been a happy hunting ground for Bell, who has scored two centuries and a 97 in five Tests at the ground, at an average of 87.

And a win in Manchester will see England win the urn outright.

"I know that the Test matches I've been involved in there, we've got a good record so it is a good place for England to go to now," Bell said.

"Coming into this series it has been about contributing to the team and at Lord's we had to work hard in different periods of the game and we got our rewards at the end.

"It has been hard work, but these couple of days will give us a nice break from the cricket so we're right for Old Trafford."