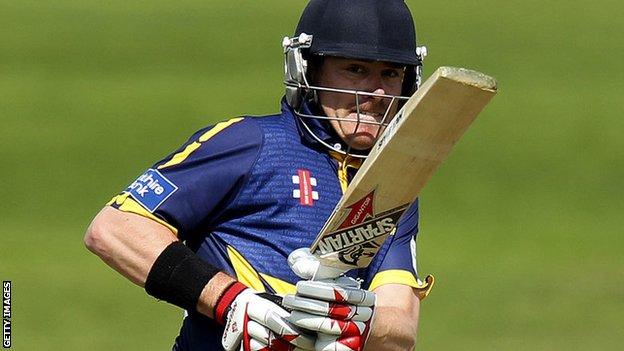 Marcus North says Glamorgan owe it to their fans to reach the quarter finals of the Friends Life t20 tournament.

The Welsh county can claim a place in the knock-out stages if they beat Northants in Cardiff on Friday evening and other results go their way.

"We all know that there's been a lack of finals cricket for Glamorgan in all formats for a number of years," said one-day captain North.

"We've got a great opportunity to put that right."

Glamorgan's five-wicket win over Worcester on Tuesday means they will qualify for the quarter-finals on Friday provided they beat Northants and both Warwickshire and Derbyshire fail to win their matches.

But North is determined his team should beat Northants and Gloucestershire in the final group game at home on Tuesday to claim a home quarter-final tie.

"We've seen some great support here at home with some great crowds," he said.

"And that would be the reward for the loyal supporters and the faith they have shown over the years when there hasn't been a lot coming."

Glamorgan have not reached the knock-out stages of the T20 competition since 2008, but have won all home games in this season's tournament.

North believes that will give the his team the edge, in spite of their last-ball defeat by Northants in their previous meeting in the competition this season.

"Northants have been playing excellent cricket in all formats this year and we know it's going to be a tough game," said the former Australian Test batsman.

"We have got an advantage of playing home with our home crowd and our conditions.

"We haven't lost here so we've a lot of confidence at home and they'll know that."

Club officials are expecting a big crowd at the Swalec Stadium, and hope the club record attendance of just over 9000 could be under threat.