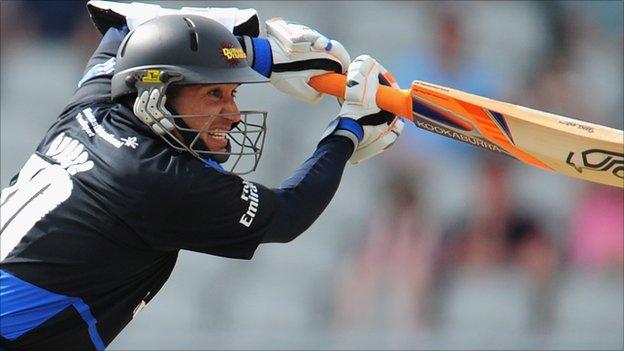 Durham all-rounder Gareth Breese says the pressure is off ahead of their last FLt20 group fixture despite an outside chance of making the knockout stages.

and can still finish second to earn a place in the knockout stage.

However, rivals Notts have a game in hand, and Sunday's opponents Derbyshire also have hopes of qualification.

Breese told BBC Newcastle: "All we can do is just win and just wait and see."

He continued: "We can all say it's our responsibility not to have to wait on anyone else, but that's the situation we are in."

The permutations mean Durham could still go through to the quarter-finals if they finish third, but it would depend on how their record compares to the third-placed teams in the other two groups.

Second place would guarantee progress, but for that to happen Nottinghamshire would need to lose their last two games in addition to a positive result for Durham against Derbyshire.

"Anyway we can go through, we'll take it," Breese added.

"If there's a little backdoor open we'll sneak in through it, and hopefully we can give a good show.