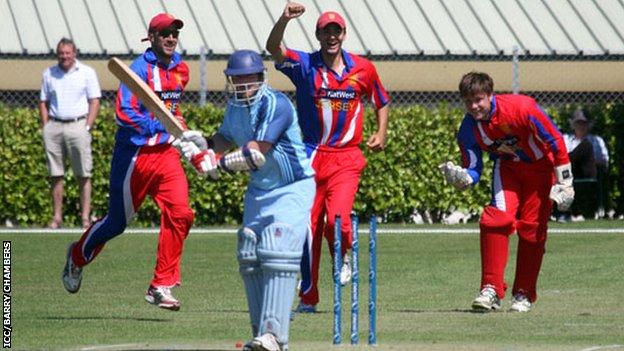 Jersey strolled to an eight-wicket win over Argentina to put the islanders on the verge of promotion from ICC World Division Six.

Ben Stevens tore through the lower order with a five-wicket haul before smashing 67 off 61 balls to help Jersey to their target of 177.

His partnership of 131 with skipper Peter Gough (69no) paved the way for a fourth win from four for the hosts.

It kept the island side two points clear at the top of the table.

"We thought we'd be chasing 220, but then Benny [Stevens] did a great job with the ball," said Gough.

"The pitch then got better to bat on in the second innings.

"Vanuatu on Saturday is a huge game for us. We want to win five from five so that's like our final. We know they're a good side and we're looking forward to playing them."

A victory for Jersey at Farmers Field on Saturday would guarantee a place in the final at Grainville and secure promotion to Division Five.

A heavy defeat though could open the door for Nigeria, but they would need a big win over Argentina to have a chance of climbing into the top two.