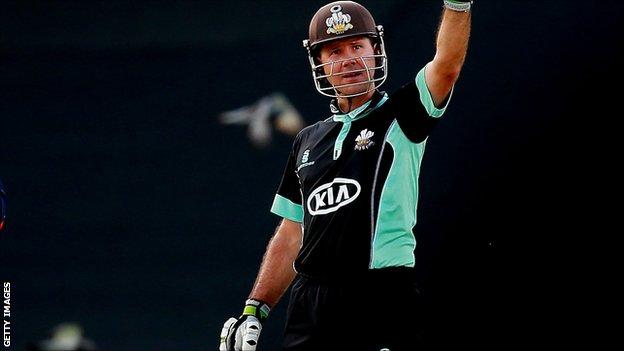 Former Australia captain Ricky Ponting says his two-month spell at Surrey has been a "special" experience.

Ponting arrived as cover for South Africa captain Graeme Smith, and made 11 appearances in first-class and Twenty20 competition during his stay.

"Everyone in the dressing room has been terrific and I've felt as at home here as anywhere I've ever been."

He added: "Considering I've only been here for a few weeks it says a lot about the calibre and the quality of the guys in the room."

Bringing the former Test skipper to the club was seen as a coup for Surrey, with a huge profile and vast experience of all formats including spells in the Indian Premier League.

As captain of his country he was the most successful of all time after overtaking Steve Waugh in 2009, while only India batsman Sachin Tendulkar has more centuries in Tests and one-day internationals combined.

Meanwhile despite some impressive personal knocks, Ponting was unable to guide the county to a first County Championship victory.

However the Tasmanian, who will now play in the Caribbean Premier League, believes there is ample talent at the Oval to turn their form around..

"It's what makes the season to date a little frustrating," he continued.

"Since I've been here things haven't really fallen into place, we've missed days and had opportunities in games that we haven't taken advantage of.

"But there's six Championship games to go and hopefully the boys can play a brand of cricket that will be good enough to win quite a few of those games."