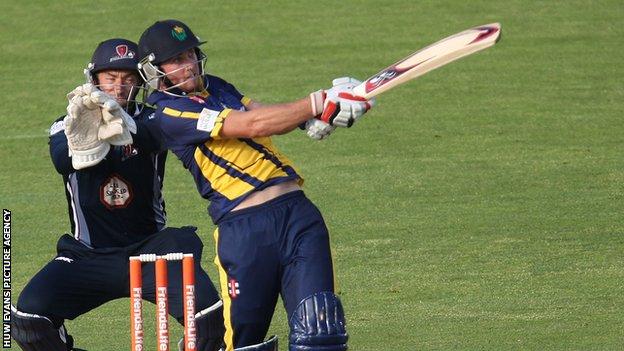 Captain Marcus North is confident Glamorgan can still advance to the FLt20 quarter-finals despite defeat to Northamptonshire.

Northants are in the last eight after a comfortable six-wicket win in Cardiff.

Glamorgan will have to beat Gloucestershire on Tuesday and hope other results go their way if they are to have a chance of going through.

"We still know if we win that last game we should be in the quarter-finals," North said.

"The good thing is we've got four days now. We can have a bit of a rest over the next day and then prepare very, very well.

The reality is we lost it with our batting. We kind of spluttered along if you like

"[We'll] leave no stone unturned [and] make sure we go into that Gloucester game as well prepared as we have throughout the tournament - give ourselves the best chance."

Glamorgan host Gloucestershire at the Swalec Stadium on Tuesday - the same evening group rivals Warwickshire and Somerset meet at Edgbaston.

North was unhappy with Glamorgan's batting performance following an innings in which they were limited to 125-9 and in which Chris Cooke was their top scorer with 50.

Fine displays from Cameron White, who scored 71 runs from 48 balls, and Mohammed Azharullah, who finished with bowling figures of 4 for 16, enabled the visitors to win by six wickets with nine balls to spare, which inflicted Glamorgan's first home FLt20 defeat of the season.

"The reality is we lost it with our batting. We kind of spluttered along if you like. Other than Cookie we didn't get going," North added.

"With Cookie, if one or two players could have built a partnership with him we could have pushed up to 140 to 150 which would have been a far more interesting game I would have thought.

"I think the way we came out and fielded and bowled was exceptional, it really gave us some sort of chance.

"Credit to Northants I thought they executed outstandingly well with the ball, especially to the new batters that came in.

"Reality is it wasn't a 125 wicket and we fell short with the bat.

"I don't think we could take a cop out and say we didn't really expect what the pitch was going to be like. I think it played pretty similar to what we talked about."