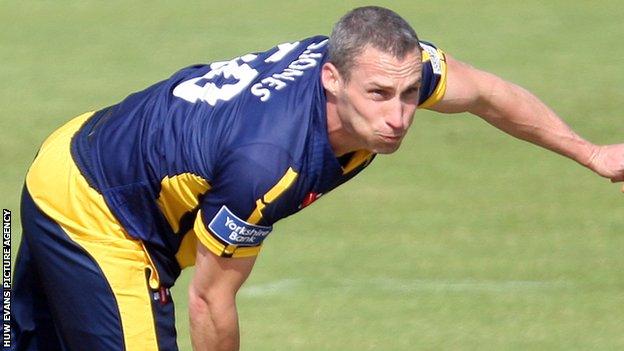 The former England fast bowler comes in for Rhuaidhri Smith in the only squad change from last Friday's defeat against Northants.

Jones hasn't played since facing the Unicorns YB40 game in May because of a shoulder injury.

Glamorgan will claim a place in the quarter finals of the t20 tournament if they beat Gloucestershire.

The six-wicket loss to Northants on Friday was Glamorgan's first home FLt20 defeat of the season but coach Matthew Mott says he won't make changes.

However, Somerset's five-wicket defeat by Worcestershire means Glamorgan now control their own destiny.

The top two teams from each of the three groups qualify automatically for the quarter finals and will be joined by two of the teams that finish in third place.

Victory against Gloucestershire would leave North's team on 12 points and guarantee them a place as one of the two best third placed teams.

But they could still qualify in second place in the Midland, Wales and West Group if Warwickshire beat Somerset.

However, North is concentrating on his own team's performance.

"If you starting thinking about possible scenarios, then that's when you get yourself into trouble.

"The key message for our guys will be to control what we can control."

The defeat by Northants stopped Glamorgan from claiming a place in the quarter finals before the final round of matches, but North says he is not planning wholesale changes.

"We'll [be] mulling that over and see what we come up with," he said.

"Our structure won't change a hell of a lot because we've certainly played a lot better cricket than we have in the previous years.

"We don't have to reinvent the wheel."