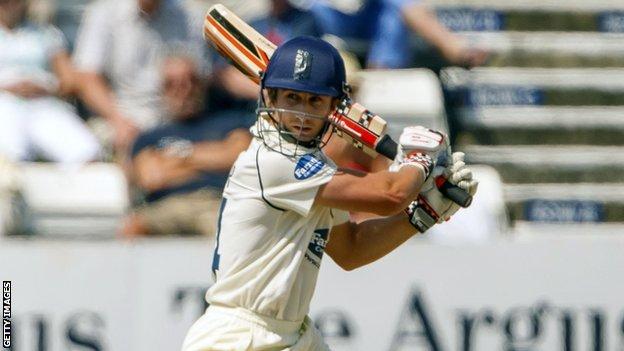 James Taylor celebrated his England Test call-up with a century as Sussex's tour match with Australia ended predictably in a draw at Hove.

Nottinghamshire guest player Taylor began the day on 64, with Sussex 228-5 in reply to Australia's 366-5 declared.

He lost overnight partner Chris Jordan for 47, but patiently reached his hundred and was unbeaten on 121 when Sussex declared at 368-7.

Australia had reached 152-2 when the draw was agreed.

Stand-in captain Ed Cowan took advantage of the opportunity for batting practice by adding an unbeaten 77 to the 66 he made in the first innings.

Usman Khawaja, who replaced Cowan for the second Ashes Test and may be under pressure when the third match begins at Old Trafford on Thursday, was caught at slip with only a single to his name.

But Phillip Hughes (38) and reserve keeper Matthew Wade (30 not out) were able to enjoy time in the middle before Australia declared to end the match.

Young left-arm seamer Lewis Hatchett took both Australian wickets to fall, while spinner Monty Panesar - recalled to England's Test squad alongside Taylor earlier in the day - bowled a controlled, economical spell on a pitch not offering assistance to slow bowlers.

The day began with the confirmation of Taylor's recall as cover for Kevin Pietersen's calf injury, and the less-heralded news of Panesar's return as a second spin option for Old Trafford, a ground where he has enjoyed past success.

Taylor rode his luck as having been dropped on 23 on Saturday, he received another life on 90 when Ashton Agar shelled a catch running back from mid-on.

But he reached his century just before lunch from the 233rd ball he faced, driving off-spinner Nathan Lyon through the covers for four.

Lyon, bidding to reclaim his place as Australia's number one spinner after being dropped for this series in favour of slow left-armer Agar, laboured for figures of 1-99 though he did pick up a wicket when he trapped Callum Jackson lbw for 26.

Meanwhile, Mitchell Starc (2-43) and Jackson Bird (2-62) were both able to press their claim to replace the injured James Pattinson in Australia's pace attack on Thursday.