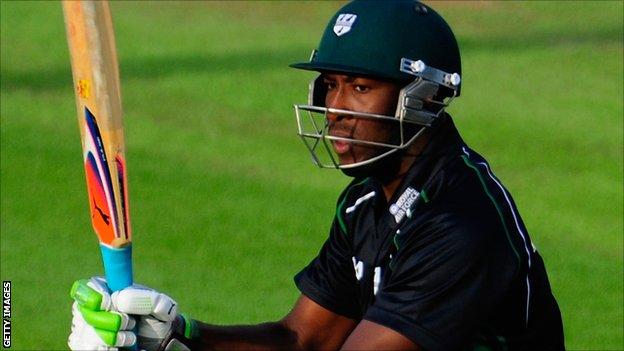 West Indies all-rounder Andre Russell says he would love to return to Worcestershire after a short spell playing for them in the FLt20.

Russell was signed by the Pears as a replacement for the injured Jacob Oram.

And after hitting 77 to help them beat Somerset in his last game for them, he said he would consider returning.

"I would love to, as long as everything was right," he told BBC Hereford & Worcester. "I'm not really in the West Indies team so anything can happen."

The 25-year-old's last match for the West Indies was in a one-day international against Zimbabwe in February this year, while his only Test appearance came in 2010 against Sri Lanka.

Following a stint at New Road which included a heart scare during last week's defeat by Glamorgan, for which he was given the all-clear, Russell admits he wants to experience the county game.

"I was thinking about it for the last two weeks since I got here," he said.

"I think it would be a good experience. As long as I'm comfortable having my family here and my daughter, I know I would be comfortable."

And he said that leading Worcestershire to only their third FLt20 victory this season was excellent preparation as he goes back to play in the Caribbean Twenty20 tournament for Jamaica.