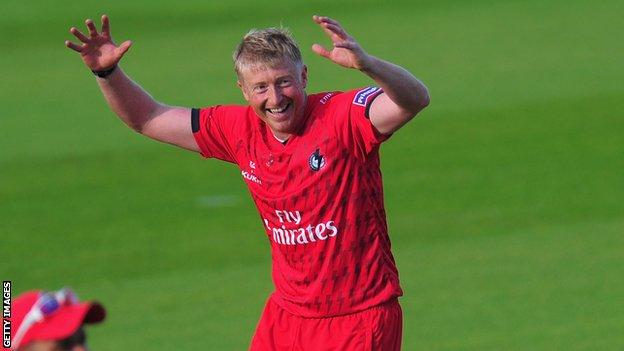 Playing their FLt20 quarter-final away from home holds no fears for Lancashire, says captain Glen Chapple.

The Red Rose missed the chance to top the North Group on Sunday,

Whoever finishes second in the South group will have a better record than Lancashire, meaning they are sure to be drawn away from home in the last eight.

"We'd have liked a home tie, but it's a one-off game. We'll go in confident," Chapple told BBC Radio Manchester.

Wherever we've got to go, once you get down to that knockout stage, it's a big game

"Fingers crossed, we'll play well on the day," he added, ahead of the quarter-final draw on Wednesday evening.

Lancashire won just one of their five group matches away from Old Trafford, although they were involved in two tied matches on their travels against and

Their final group game ended in a heavy defeat at Trent Bridge, but that was of little concern to head coach Peter Moores, who has been impressed with his side's progress in the competition.

"Through the whole of the tournament, we've been getting better," he said. "Generally we've found our way and it takes a bit of time. We've had a pretty consistent tournament.

"If you're going to have an off day, it's better to do it now [when qualification has already been guaranteed] than in the quarters.

"Wherever we've got to go, once you get down to that knockout stage, it's a big game. We're ready to have a crack at whoever we draw."

Lancashire have never won the domestic T20 competition, coming closest to lifting the trophy in 2005 when they were beaten in the final by Somerset.