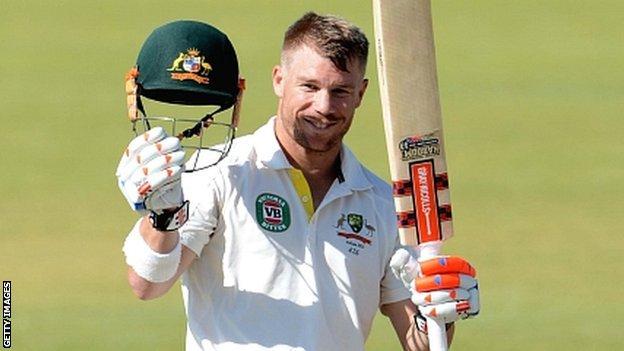 Batsman David Warner will rejoin the Australia squad on Monday and be available for the third Ashes Test at Old Trafford, starting on Thursday.

With Australia's top order struggling for runs in the first two Tests, Warner, 26, is likely to be recalled.

He joined the Australia A tour to Zimbabwe and South Africa, scoring 193 against South Africa A in Pretoria.

But the left-hander was involved in a verbal altercation with opponent Thami Tsolekile on Saturday that caused the umpire to halt the game.

"A kid from the back blocks with a strong personality, Warner is outgoing, likes talking to people and always has an opinion. He is popular with his team-mates and respected in the dressing room. He has that lively and nocturnal side to his personality. But he is 26 now, and off the field he needs to change."

No Australian batsman scored a century in the first two Ashes Tests, both won by England.

Opener Chris Rogers has made only 89 runs in four Test innings, while Phillip Hughes has made 83, including scores of 0, 1 and 1.

Usman Khawaja replaced Ed Cowan for the second Test at Lord's and scored 54 in his side's second innings. Cowan then made 66 and an unbeaten 77 against Sussex in a tour match that finished on Sunday.

Asked whether Cowan's displays against Sussex improved his chances of a recall, Australia coach Darren Lehmann told BBC Sport: "Yeah, it does. He batted really well both innings.

"We'd love him to get a big hundred and really put pressure on, but it does his chances good."

Lehmann added he was confident the team's plans to combat England spinner Graeme Swann were sound, despite Swann taking 13 Australian wickets so far in the series.

"Swann's bowled OK, but we haven't played him very well," said Lehmann, whose side must win at Old Trafford to keep alive their hopes of reclaiming the Ashes. "We've just got to believe in the plans and the blokes have got to execute them."