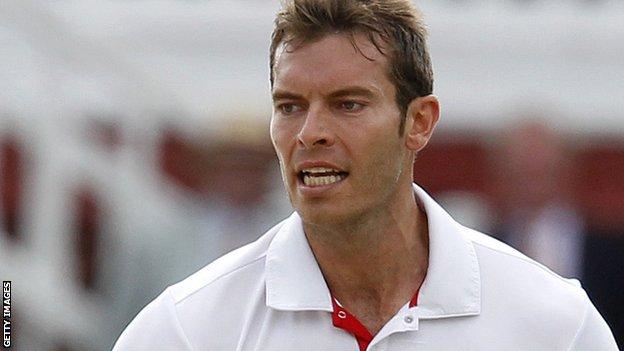 The 31-year-old fast bowler has not played for England for 15 months.

"He's not set the world alight this year but as we've moved through the summer I've seen Chris improving steadily throughout," said Barnes.

"Ultimately he makes the batter play, bowling a real attacking line and bowling an international line."

Tremlett has had a number of injuries since his last England appearance, but took 17 Â­wickets in just three Tests during the last Ashes series in Australia.

This season he has taken 19 County Championship wickets at an average of 39.6 and with Old Trafford renowned for having a pitch that helps fast bowlers produce bounce, the 6ft 7in bowler could make a surprise return.

"When I started in November, one of his ambitions and goals was to get back into the England team," Barnes told BBC London 94.9.

"To do that, he had to get back playing and performing for Surrey and there's been this real steely determination to get to those goals throughout the winter.

"He's been constantly improving. He's achieved lateral movement when the ball is swinging for us which has often meant he beats the bat without taking wickets."

Former England team-mate Steve Harmison told BBC Radio 5 live: "When you get Chris Tremlett bowling well, he has got things nobody else has got - pace, he's tall, he hits a good area.

"Now if they want to wrap him up in cotton wool ready for [the return series in] Australia, I don't see the point of that.

"When you've got him fit and firing, get him out there, get him playing.

"If he comes in, he comes in for Tim Bresnan, who to be fair has done nothing wrong.

"Do you bring him straight into the side? Well I would argue you do because there's no point picking him and not playing him.

"To get him up carrying drinks for two or three days and then send him away - that just completely messes his whole plan up for the rest of the summer."