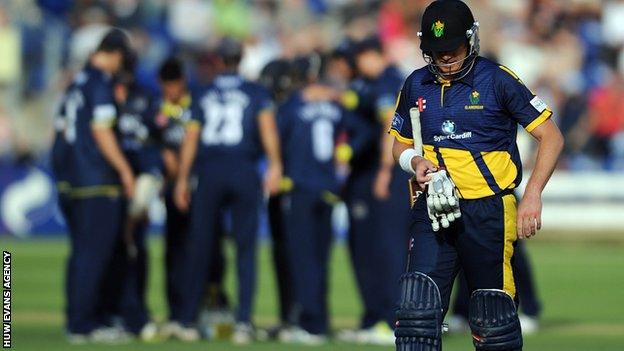 The Welsh county's nine-wicket defeat to Gloucestershire in Cardiff meant they failed to reach the quarter-final for the fifth successive year.

Glamorgan had won their first four games in their group, but lost five of the next six matches.

"After the start we got, this is a big disappointment not to be playing in the quarter-finals," said North.

"We are very disappointed, and this one [defeat] will take a little time to get over."

Glamorgan opener Jim Allenby once again proved to be the home side's driving force, hitting an unbeaten 85 off 65 balls.

But the rest of his team failed to find any kind of form with the bat and Glamorgan ended up with a total of 141-5.

It was quickly apparent that the Welsh county's total was inadequate as Michael Klinger smashed 86 off 59 balls as Gloucestershire lost just one wicket on the way to claiming victory with 21 balls to spare.

The victory sealed a double over Glamorgan for Gloucestershire, who finish bottom of the Midlands, Wales and West Group in spite of their win in Cardiff.

Top-scorer Allenby echoed his captain's disappointment at the manner of Glamorgan's defeat.

"Frustrating is an understatement," said Allenby.

"We needed to win two games out of six and we didn't manage that. So over 10 games we were not good enough to qualify and we got what we deserved.

"10 games, without rain, playing 40 overs every game... but we were not good enough for whatever reason.

"We gave it a good crack, but we have fallen short and we need to figure out why that is."