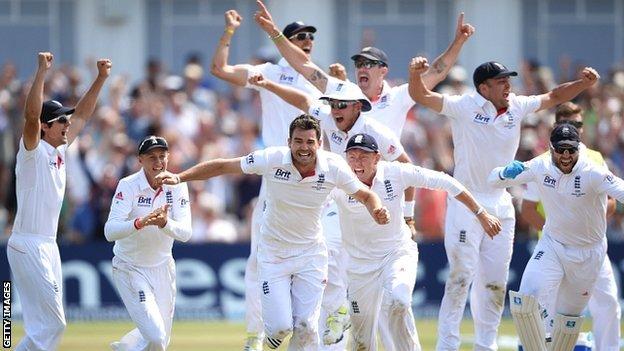 Anderson has taken 13 wickets in the first two Ashes Tests to help England to a 2-0 lead over Australia, ahead of the third at Old Trafford on Thursday.

The 31-year-old has 320 Test wickets, placing him third in England's all-time list behind Ian Botham and Bob Willis.

"Jimmy Anderson is leading from the front. For me he is the best bowler of this era," Wasim told BBC Sport.

"He does it consistently, with the new ball and the old ball."

Left-arm quick Wasim and his Pakistan team-mate Waqar Younis tormented opposing batsmen in the late 1980s and 1990s with their expertise in reverse-swing bowling and Wasim recognises Anderson as a fellow master of the craft.

"Jimmy is up there with me and Waqar because of the control he has," said Wasim, who played for Anderson's county side Lancashire between 1988 and 1998.

"He was always good with the new ball, but with the old ball he is intelligent. He bowls five away-swingers, then one inswinger and takes a wicket.

"Other England bowlers like Steven Finn and Stuart Broad try to alternate inswingers and outswingers, but if you do that your line or length won't be the same every ball you bowl."

Although Anderson's career average of 29.66 is significantly inferior to Steyn's 22.65, Wasim believes the Englishman has edged ahead in 2013, a year in which he has taken 32 wickets in seven Tests at 23.12.

"I have seen Dale Steyn bowling with the old ball and he only bowls one delivery - the inswinger to the right-hander," added Wasim.

"Steyn is one of the best in the world as well, but Jimmy is slightly ahead because he does a lot more with the old ball."

Former England seamer Andy Caddick believes the world has still not seen the best of Anderson.

"I think we will see a lot better bowling from Jimmy.

"Now he is the finished article, he knows his game. When you start knowing your game as a bowler you are going to continue doing well."

Anderson's next challenge is to help England clinch a victory at Old Trafford that would win them the Ashes with two matches to spare.

It would be Australia's third successive Ashes series loss and former England all-rounder Andrew Flintoff believes it could be some time before they regain the famous urn.

"Australia seem very much a work in progress and they are a long way away from competing - we are probably talking years," Flintoff told BBC Sport.

"We have seen from England that it can take a while and I think they are playing for pride more than anything at the minute.

"England should dominate for a few years now."

Chris Tremlett, the 6ft 7in Surrey fast bowler, has been called into England's squad for Old Trafford, which traditionally produces quick and bouncy wickets.

But Flintoff believes England should keep faith with Tim Bresnan, who took four wickets and scored a second-innings 38 in the 347-run victory at Lord's.

"Everyone goes on about Old Trafford bouncing and being quick but it does suit bowlers that attack the stumps," said Flintoff, who was part of the England side that regained the Ashes after an 18-year wait in 2005.

"I would stick with Bresnan for this one because the pitch should be quite flat.