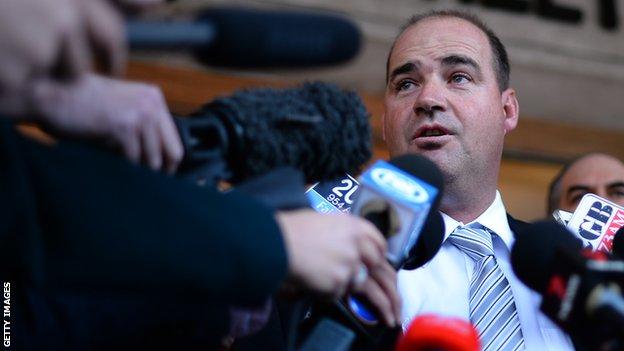 Mickey Arthur has reached a settlement with Cricket Australia (CA) after the South African began legal proceedings over his dismissal as national coach.

The 45-year-old was sacked in June, just 16 days before the Ashes started.

The settlement is confidential but Arthur said he had "significantly reduced" his £2.4m compensation claim.

"Both Mickey and CA agree that it is unfortunate that the dispute was not settled prior to the issuing of legal proceedings," read a joint statement.

"Cricket Australia appreciates the efforts that Mickey applied to his coaching role, and wishes him the very best in his future career."

Arthur, who took over as Australia coach in November 2011, had suggested there was a "deliberate campaign" against him after his sacking.

The latter stages of his tenure were affected by problems both on and off the field.

Four players were dropped for the third Test against India in March for failing to submit presentations on team strategy and Australia went on to lose the series 4-0.

Batsman David Warner was fined in May for posting abusive comments to journalists on Twitter, then suspended and fined for punching England's Joe Root in a bar during the Champions Trophy in June.

Arthur was replaced by Darren Lehmann, whose side trail England 2-0 in the Ashes ahead of the third Test match, which starts at Old Trafford on Thursday.