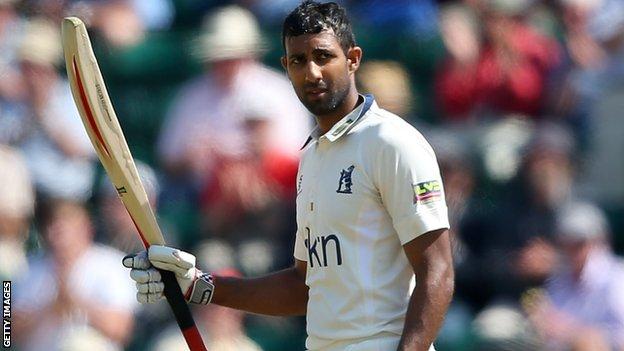 Batsman Varun Chopra has agreed a new three-year deal with Warwickshire to keep him at Edgbaston until the end of the 2016 season.

He was also part of the Warwickshire side to win their first County Championship since 2004 last term.

"He has a proven record of scoring big runs in all formats of the game," director of cricket Dougie Brown said.

"He is a great role model for all the Warwickshire youngsters to aspire to and securing a player as highly thought of as him for the next three years is a massive boost for everyone connected with Warwickshire."

Chopra has also stood in as Warwickshire captain this season while Jim Troughton has been on the sidelines with injury.

His form in the County Championship also saw him called up to England's Performance Programme last winter and the provisional squad for the ICC Champions Trophy.

"Since joining from Essex I've enjoyed a great four years at Edgbaston, where the club has won trophies and I've been able to contribute runs at the top of the order," Chopra said.

"We've got a strong squad, great coaching team and I'm looking forward to at least three more years here, where I hope to contribute towards winning more trophies for Warwickshire and its supporters."