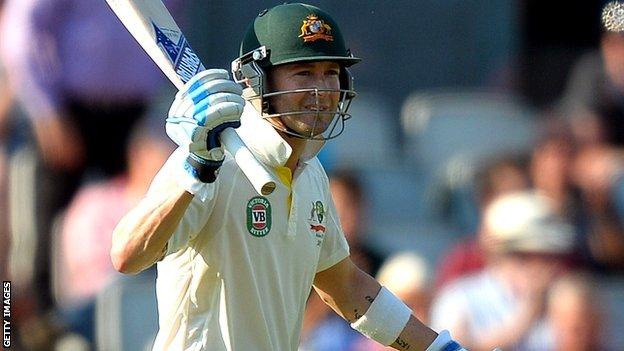 Australia opener Chris Rogers described Michael Clarke's century on day one of the third Ashes Test as a "massive" moment in the series.

Skipper Clarke made an unbeaten 125 at Old Trafford as the tourists finished the day on 303-3, Rogers making 84.

"For him to get big runs is massive for us - if he scores runs it makes it easier," said Rogers, whose side are 2-0 down in the series.

"We need him scoring runs because a lot of the guys are still learning."

Meanwhile, to clarify the decision review system after Usman Khawaja was ruled to have been caught behind despite video replays suggesting he did not hit the ball.

"Michael Clarke is a quality player and his was an excellent innings. Their captain is their best player by a long way, and he needed to move up into the top four. Today he finally batted like one of the best players in the world. He struck the ball cleanly, precisely, and used his feet to the spinners well."

Rogers had scored only 89 runs in his first four Ashes innings but the normally cagey left-hander played positively from the outset on Thursday, after Clarke had won the toss for the first time in the series.

"I wanted to show people I can play an innings like that, that I'm not just a guy who will try and eat up time," said the 35-year-old, who passed 20,000 first-class runs during his knock.

"My performances haven't been anything to write home about and I knew if I'd had a bad Test I would have been under a lot of pressure.

"As a batting side we've been under a lot of pressure and copped a lot of criticism. But the pressure was off us a little bit and we could go out and play with a bit more freedom and it worked out much better for us.

"I needed a couple of days after the last Test to deal with the criticism. To have guys you respect criticising you, and justifiably so, it hurts. But it strengthens your resolve."

Australian legend Shane Warne spent time with the tourists before the third Test, offering technical and tactical advice, and Rogers said a change of approach against England spinner Graeme Swann paid off.

"We tried to rotate the strike and frustrate him a little bit," said Rogers.

"He's an excellent bowler and he doesn't give you much so you have to find a way. So we tried to be positive against him."

Nevertheless, Rogers said he was surprised by how much the pitch turned on day one, adding that this could play into the hands of visiting spinner Nathan Lyon, back in the side in place of Ashton Agar.

Meanwhile, England bowler Tim Bresnan, who took 1-51 from his 20 overs, believes England can be fairly pleased with their discipline in the field.

"We didn't think they would [roll over] - we stuck to our task well but they've played pretty well," said Bresnan, who dismissed opener Shane Watson for 19.

"The ball's not really done a lot off the wicket, it swung for periods but when the sun's good and the wicket's flat there's not a lot you can do, you've got to stick to your areas and I thought we did that."