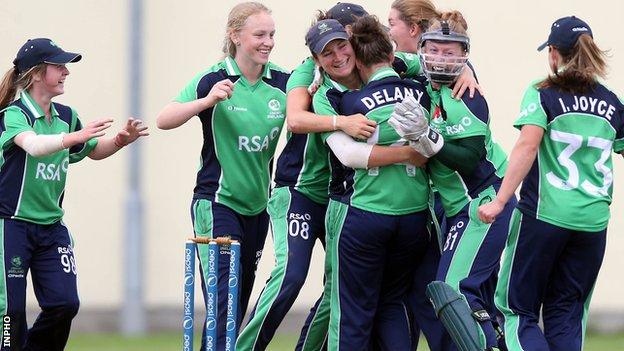 Ireland's women qualified for next year's World Twenty20 after a thrilling two-run win over the Netherlands in Dublin on Thursday.

Just one place in Bangladesh was on offer in the third-place play-off in the qualifying tournament.

The Netherlands only lost four wickets but came up short after needing four runs off the final ball for victory.

Garth and Louise McCarthy took a wicket apiece while the Dutch suffered two run-outs in making 134-4.

Laura Delaney had the pressure of bowling the final over, with the Netherlands needing 12 to win.

Just nine runs came from her six deliveries although a boundary from the last ball would have dashed Irish hopes.

The game at the YMCA was originally scheduled for Wednesday but rain caused it to be postponed.

Pakistan and Sri Lanka, who shared victory in the competition after the weather brought a premature end to the final, also qualified for the 2014 World Twenty20.

Ireland had beaten Japan and Canada in their opening two games before slipping to successive heavy defeats against the two finalists.