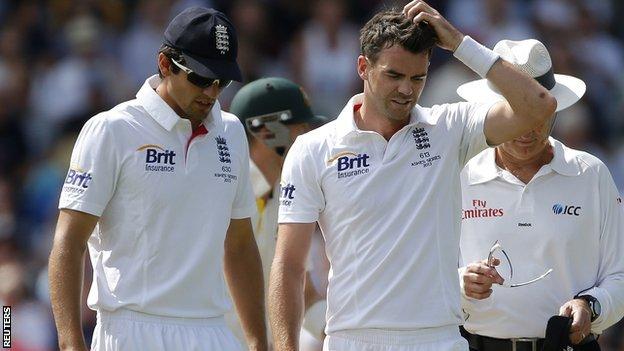 On the face of it, Australia are in control of the third Test after racking up 527-7 declared and reducing England to 52-2.

In the context of the series, however, England will not be unduly concerned by the way things are panning out.

They know they only need to draw the game to retain the Ashes and that Australia face a mammoth task to take the 18 remaining wickets they require to stay in the series on such a flat pitch.

Once Australia had seen off England's attack in the first hour of play, Alastair Cook's plan for the day was to slow the game down, bowl maidens and ensure that it took the tourists as long as possible to score the runs they wanted before declaring.

The hosts set very defensive fields and only bowled 26 overs in each of the first two sessions, which was a clear indication of their delaying tactics.

Trailing 2-0 in the series with three to play, Australia are the ones who need to chase the game and once again they performed very well, led by their outstanding captain Michael Clarke.

There were one or two exceptions of course, and I fully expect Steve Smith to be regretting his bizarre decision to slog-sweep Graeme Swann when only 11 runs short of a maiden Test hundred.

As for David Warner, I was very disappointed to hear people booing when he walked out to bat. That kind of behaviour may be acceptable in other sports but it is not what cricket is about.

On the other hand, Warner did little to enhance his reputation in the England supporters' eyes with his extraordinary decision to review his dismissal after a thick edge that flew off Matt Prior's leg to Jonathan Trott at slip.

I suppose he felt it was a crucial moment in the game, but he must have known he had nicked it, and to convince his captain to risk their last referral was just astonishing.

After yesterday's controversies, this was at least an example of the decision review system doing what it is supposed to do. If it prevents batsmen from trying to get away with something like that, then it certainly has some merit.

"I've been really impressed with the way Australia have bowled. They've been quicker than the England seamers and Nathan Lyon looks a huge threat.

"England are going to have to play out of their skins to get a draw from this position; I've already taken the win out of the equation."

Peter Siddle then underlined his qualities as he ran in with real purpose to remove Joe Root and Tim Bresnan, and if Australia had taken either of their chances to dismiss Cook, England could have been in trouble.

As it stands, however, Australia still have it all to do on a pitch offering very little to their fast bowlers.

Their biggest chance of a victory probably lies with off-spinner Nathan Lyon, who in the space of 10 probing overs on Friday evening exposed the folly of the decision to leave him out of the first two Tests.

He had the England batsmen in considerable difficulty and could easily have removed Cook when an edge was missed by Haddin and landed just short of Clarke at slip.

It was a romantic whim to bring in Ashton Agar at the age of 19 after just 10 games. Although Lyon's inclusion probably would not have altered the result of the previous two matches, on this evidence he certainly would have posed more questions with the ball.