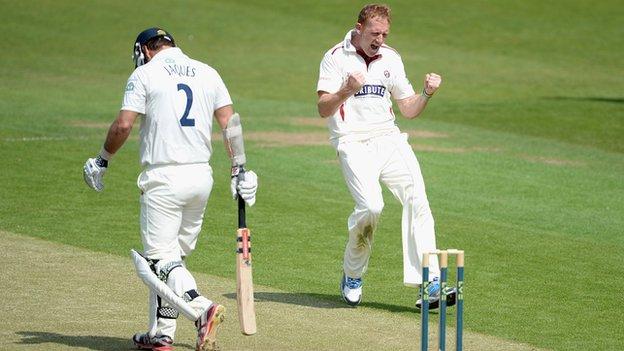 Pace bowler Steve Kirby and spinner Max Waller are among eight players who have signed new contracts with Somerset.

Tom Abell, Alex Barrow, Adam Dibble, Lewis Gregory, Chris Jones and Jack Leach have also agreed to stay at Taunton beyond the end of the season.

"This is great news and I am sure all members will be delighted to retain such an exciting group," said director of cricket Dave Nosworthy.

The club confirmed a number of senior players had yet to re-sign new deals.

Speculation has surrounded the future of England's one-day wicket-keeper Jos Buttler, after it was reported he was looking for another county in order to get more time behind the stumps.

It has also been reported that Nick Compton, who started the year in the England side but has since been dropped, could leave Taunton at the end of the season.

Nosworthy added in a statement on the club website: "We are still in discussions with a couple of senior players and we are doing everything we can to make sure they stay at Somerset.

"We will of course let members know as soon as these have been resolved."