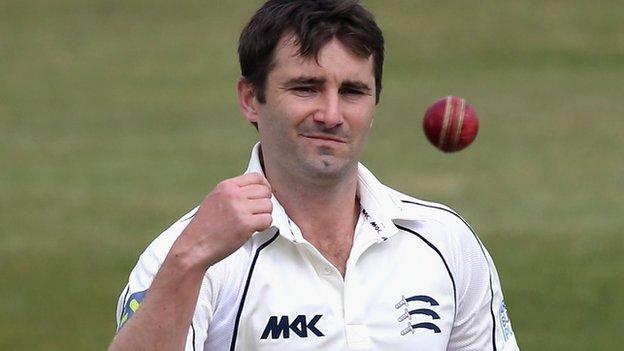 Middlesex ripped through Durham's batting line-up for the second time in two days to move to within 44 runs of victory with eight second-innings wickets left at the close of day two.

Resuming their first innings on 126-5, the hosts only reached 168 largely because of Graham Onions' superb 7-62.

Trailing by 25, Durham once again struggled with Ben Stokes (51) the pick of the batsman as they posted 171.

Middlesex showed rare composure on a day when 17 wickets fell to make 103-2.

Joe Denly raced to 32 off 33 balls before he fell to Onions when he was caught at cover.

But at 41-2, Adam Voges (36) and Eoin Morgan (24) batted sensibly to leave the home side set to claim a win that will see them move above their opponents into third place in the County Championship standings.

Earlier Onions took all five of Middlesex's remaining first-innings wickets to give his side real hope.

But a second poor batting effort and some fine bowling by discarded England paceman Steven Finn, Ollie Rayner and Tim Murtagh put the hosts back in control

All three men took three wickets to leave Middlesex chasing just 147 for victory, and their batsmen left them on the brink of victory.

"Having edged the first three innings of the match, Middlesex have claimed full control in what could have been a tricky run chase.

"Few batsman have shown application leading to 32 wickets falling in five-and-a-half sessions but Eoin Morgan and Adam Voges have produced what appears the decisive partnership.

"Ben Stokes is the only batsman to pass 50 so far but summed up the reckless shot selection that has defined the match by charging the first over of spin offered from Middlesex.

"Durham had just started to find some resolve but that wicket led to a collapse and now another heroic performance is required from Onions if there's to be a final twist to the tale."

"Durham's hopes of only their second Championship win at Lord's appear to be over. Middlesex need just 44 more runs to wrap up victory and have eight second-innings wickets in hand.

"The game should be over on the third morning and unless there is some kind of miracle, Durham will slip to only their third championship defeat of the season.

"But miracles can happen. Graham Onions took the final five Middlesex wickets in their first innings in a spell of stunning skill.

"The wickets came in just 3.1 overs and in taking them he conceded just 13 runs to remind the England selectors of what he is capable of having been dropped from the squad for the third Test at Old Trafford, where England have struggled to take wickets.

"Ahead of the fourth Test against Australia in Chester-le-Street on Friday, Onions says he hasn't given up hope of playing, although he admits he has no news of whether he will be called into the squad."