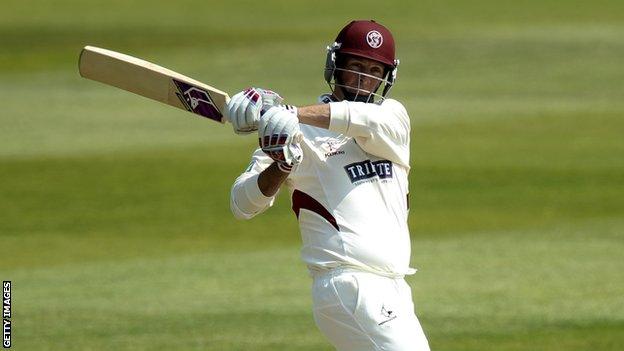 Somerset recovered from the early loss of captain Marcus Trescothick on a rain-affected second day at Taunton against Nottinghamshire.

Notts added 51 to their overnight score with Luke Fletcher (58) reaching his second Championship half century this summer as they were all out for 378.

In response, Trescothick only made two runs from 27 balls before pushing out to third slip off Harry Gurney.

But Chris Jones and Nick Compton saw them to 70-1 before rain stopped play.

Former England batsman Trescothick's struggle was symptomatic of his recent form in the Championship, having been out for ducks in his last two innings.

And he once more faltered on a day where only 37 overs were possible as the umpires brought the day's play to a premature end at 16:00 GMT.