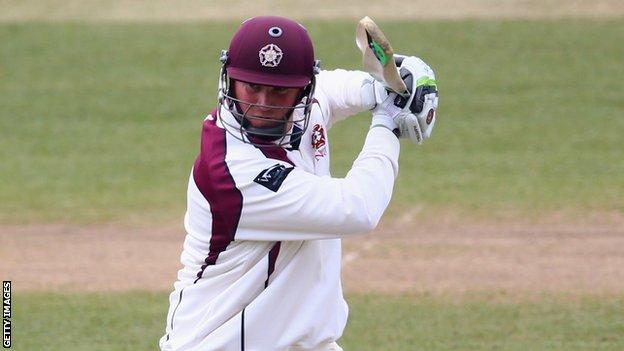 Centuries from David Sales and Kyle Coetzer helped put Northants into a strong position going into day three against Gloucestershire.

Openers Stephen Peters (87), in his first Championship game since returning from a broken finger, and Coetzer shared 170 for the first wicket.

Coetzer (122) then reached his eighth career first-class ton alongside Sales, piling on 135 runs in their stand.

The 35-year-old's century was his 27th in first-class cricket, but his first in the Championship this season, and came off just 107 deliveries.

"This was a day to remember for David Sales. One of Northamptonshire's favourite sons turns 36 later this year and this was vintage Sales.

"Aggressive with expansive shots all around the wicket, he took advantage of Peters and Coetzer's opening stand worth 170.

"Coetzer's century added to his 219 against Leicestershire, but Sales' previous top score was worth only 40 this year.

"After this, he must be in consideration for Tuesday's T20 quarter-final against Durham, with Richard Levi away on international duty."

"Few positives for Gloucestershire on a flat track.

"Eighteen-year-old Tom Shrewsbury claimed his first wicket in the first-class game and was not afraid to give the ball air and flight, but the seamers lacked penetration.

"The visitors will need to get wickets quickly in the morning."