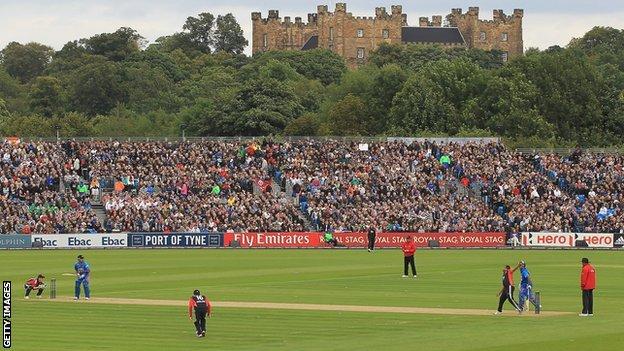 Durham learned in July 2009 that they had finally been awarded an Ashes Test, 17 years after they became England's 18th and newest first-class county.

Chester-le-Street has hosted four Tests since 2003, all of which have come as part of early-season series against Zimbabwe, Bangladesh and West Indies - and all of which have resulted in thumping England victories.

Tests: 4 (England won all four, including three by an innings)

Lowest Test total: 94 by Zimbabwe in their first innings of that inaugural Test in 2003 - keeper Tatenda Taibu (31) was the only man in the top eight to make double figures. Second time around, they made 253 but still lost by an innings.

Highest individual Test score: 162 not out by England's Ian Bell against Bangladesh in June 2005, in only his third Test. At that stage of Bell's career, his three Test innings (70, 65 not out and 162 not out) had given him an improbable Test average of 297.

Most Test runs: 276 by West Indies batsman Shivnarine Chanderpaul, who proved to be the proverbial immovable object in 2007 (scoring 136 not out and 70), and returned in 2009 to make 23 and 47. The biggest total by an Englishman is Marcus Trescothick's 194.

Best Test bowling (innings): 6-33 by England seamer Richard Johnson on his debut against Zimbabwe in 2003. Though he went wicketless in the second innings, it earned him the man-of-the-match award.

Most Test wickets: 16 by England fast bowler Steve Harmison, one of only three men to play three Tests on the ground (along with Andrew Strauss and Michael Vaughan). "Grievous Bodily Harmison" warmed up for the 2005 Ashes series by taking 5-38 against Bangladesh, who were skittled for 104.

Before Australia arrived for the historic 2005 Ashes series, England had the small matter of a two-Test series against Bangladesh to deal with.

They negotiated the opening Test at Lord's with the minimum of fuss, needing little more than two days to crush the underdogs by an innings and 261 runs.

Another mismatch looked in prospect when the teams headed north for the second Test at Chester-le-Street the following week.

Indeed, the second Test followed a similar pattern to the first as England won the toss and chose to field, rolled the tourists over for little more than 100 in fewer than 40 overs, cashed in on runs as only their top five were required to bat, and wrapped up victory early on day three.

Only opener Javed Omar (37) and keeper Khaled Mashud (22) reached double figures as Bangladesh were all out for 104.

England opener Marcus Trescothick followed up his 194 at Lord's with 151 from only 148 balls, and though his partner Andrew Strauss missed out, rapid scoring by Trescothick, captain Michael Vaughan (44), rookie Ian Bell (162 not out) and veteran Graham Thorpe (66 not out in his 100th Test) allowed Vaughan to declare at 447-3.

England won by an innings and 27 runs

As at Lord's, the Tigers were better in the second innings with Omar (71), captain Habibul Bashar (63) and Aftab Ahmed (82 not out) hitting half centuries.

But England's four-pronged pace attack - Harmison, Mathew Hoggard, Andrew Flintoff and Simon Jones - enjoyed a good work-out ahead of the Ashes, and Hoggard (5-73) took the last five wickets to finish with match figures of 8-97.

The fifth member of that attack was not regular spinner Ashley Giles, who was nursing a hip injury, but his stand-in Gareth Batty, playing his seventh Test. Not required to bowl in the first innings, he took 1-44 in the second.

England took the series 2-0 - job done. The Australians, who began their tour with a 20-over match against a Professional Cricketers' Association Masters XI four days later, lay in wait.

What happened next? Nine of the England XI went on to play in the Ashes as England regained the urn for the first time since 1987. With Giles fit again, Batty never played another Test, though he did appear in five more limited-overs internationals, four of which came in the West Indies in early 2009. Still playing at 35, he has been Surrey's stand-in captain this year.

Though he did not know it at the time, Thorpe's 100th Test was to be his last. When the Ashes came around, England preferred a young South Africa-born batsman called Kevin Pietersen who had impressed in the one-day side. On the second day of the first Ashes Test, Thorpe announced his retirement from international cricket. He became batting coach for England's limited-overs sides in January 2013.

A bit of a cheat, this one - but with Chester-le-Street's limited Test history, we've selected a moment from a one-day international against Australia.

After that Test series against Bangladesh (see above), England and Australia met at the Rose Bowl in only the second ever Twenty20 international, which England won by 100 runs.

Australia's shaky start to the tour continued as they lost a one-day match to Somerset, who had Graeme Smith and Sanath Jayasuriya opening the batting.

They then embarked on a triangular one-day series against England and Bangladesh, but the Aussies lost their first game to Bangladesh in Cardiff, while having to discipline all-rounder Andrew Symonds who had been out drinking the night before the game.

Defeat to England in Bristol followed - so by the time Australia headed north to Durham, the previously all-conquering world-beaters had lost their first three competitive games of the tour.

However, all-rounder Shane Watson did not have a pleasant time at Lumley Castle, which overlooks the ground and where the Aussies stayed the night before the game.

Watson later recalled how team bus driver Geoff Goodwin had wound him up with stories of how the castle was haunted.

"He said certain rooms are more haunted than others," Watson explained. "Then I went back to my room, it was tiny and I had to walk through a dungeon to get there, so I got a bit spooked out."

Watson was so affected that he spent the night on the floor of team-mate Brett Lee's room - and the story was not destined to remain a secret, certainly not from veteran England pace bowler Darren Gough.

With Vaughan missing the game through injury, England were led by vice-captain Trescothick who won the toss and fielded first, and the Aussies finally found form as Damien Martyn (68 not out) and Symonds (73) put them on course for a big total.

Batting at seven, Watson joined Martyn at 247-5 with 13 balls of the innings remaining. Gough bowled the penultimate over and when he moved to field a straight drive from Martyn, he took the opportunity to "scare" Watson, raising both arms in the manner of a ghost before walking back to his mark.

It did not seem to affect Watson's form - he scored 11 from the seven balls he faced, while later took the wicket of Geraint Jones as Australia cruised to victory by 57 runs. Gough finished with 0-41 from his 10 overs, and though he spooked the Aussies with a lusty 46 not out when the game was all but lost, the tourists never had to face the spectre of defeat.

What happened next? England and Australia reached the final of the triangular series and played out a thrilling tie at Lord's as Gough was run out off the penultimate ball of the match and Giles and Harmison scrambled two leg byes off the last delivery.

England and Australia then played a brief three-match ODI series - without Bangladesh, but with an experimental "supersub" rule which, to the relief of most cricket fans, lasted less than a year. Australia won that series 2-1 - but England came from behind to win the Ashes series 2-1.

Watson has remained a key member of the Aussie one-day side, winning the World Cup in 2007 and playing a starring role in the Champions Trophy success of 2009, the same year he finally established himself in the Test side - as an opening batsman.

Knee problems had forced Gough to retire from Test cricket in 2003 but he remained in the limited-overs side, playing his last ODI against Pakistan in September 2006. After three years at Essex, he returned to his home county Yorkshire as captain in 2007, retiring after the 2008 season.