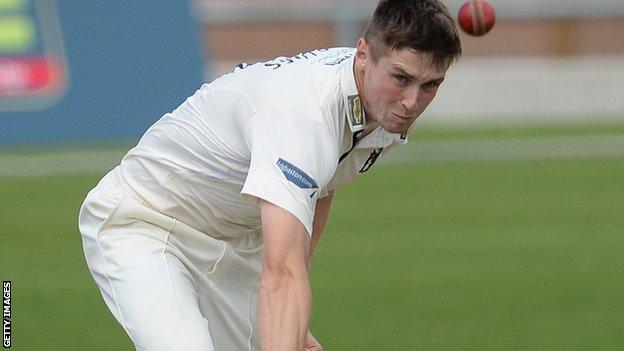 The hosts will have started day three believing they could quickly polish off the Warwickshire tail and set about posting a fourth innings target, but Barker and Patel had other ideas.

They were untroubled, Patel smashing 11 boundaries on his way to 50, until a calamitous run-out brought Barker's knock to an end as he chased a second run that would have meant a half-century for him and a 100-run partnership for the pair. Patel feathered Ryan Sidebottom to the wicketkeeper soon after.

Woakes then removed both openers to put Yorkshire 17-2, Lees nicking to Patel at slip and Lyth was struck plumb in front just three balls before lunch - a break extended by half an hour because of rain.

Skipper Gale and Ballance then led the hosts to a strong position but, after a five minute stoppage for bad light, Gale edged Boyd Rankin straight to gully and Adil Rashid then hooked the Irishman up in the air without troubling the scorers.

Azeem Rafiq fell to Patel two overs later before Woakes clean bowled the dangerous Ballance, who hit 112 in the first innings, for 49 and made Plunkett his fourth victim of the day to take his figures to 4-31 with what proved to be day three's final delivery.

"There has been a transformation in this match after Warwickshire bossed the third day against a Yorkshire side who were below par.

"Two catches went down this morning as Warwickshire carved out a first-innings lead.

"In their second innings, Yorkshire can thank the ever-reliable Gary Ballance for scoring 45 as the rest of the batsmen batted with anxiety, meaning wickets fell quickly."