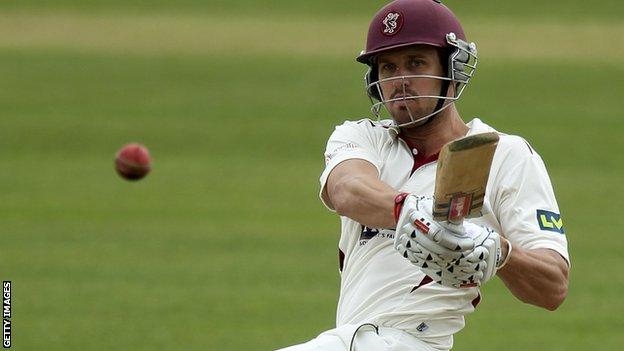 Nick Compton struck an unbeaten 70 as Somerset battled to a draw against Nottinghamshire on day four at Taunton.

Resuming on 188-9 in the first innings, still 190 runs behind the visitors' 378 all out, Steve Kirby was out to the day's second ball without adding a run.

Notts enforced the follow on but Marcus Trescothick (39) shared 79 with Compton to get the hosts off to a solid start.

Chris Jones also fell but Compton and James Hildreth took Somerset to 141-2 when rain forced play to be abandoned.

First bad light halted the action at 15:30 BST, with an early tea being taken, before heavy rain prevented the players returning to the field.

Compton's innings was typically watchful, coming off 166 balls and including eight fours, in guiding Somerset to their sixth drawn County Championship match of the summer, leaving them seventh in Division One.

Notts, who are without a four-day victory since their 114-run win over Surrey in May, are sixth.