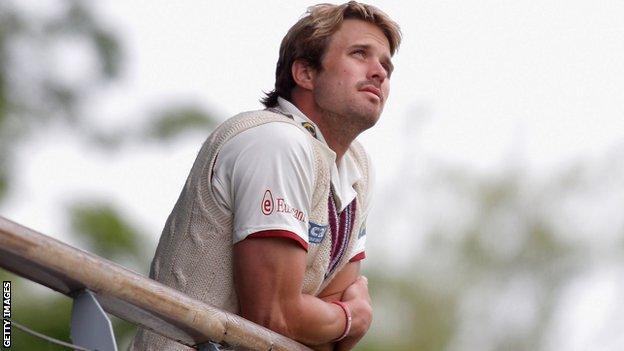 Batsman Nick Compton has said he would have to consider his future at Somerset if they were relegated to Division Two.

The Taunton club finished Division One runners-up last year but currently sit seventh with only one win all season.

Compton is out of contract at the end of the summer and has expressed his desire to earn an England recall.

When asked if the club's final position would influence his future plans, the 30-year-old said: "I'm not sure at this stage and I've said it to the club."

He added: "I will make the decision in the next couple of weeks and I'll make the best decision moving forward.

"You want to be playing at the highest level. This is a first division club, that's why I came here.

"We've got too good a set of cricketers in that changing room to be playing second-tier cricket."

I'm still trying to give myself the best chance of getting back in... I just want to make sure the selectors don't forget me

He finished as the County Championship's top run scorer last term with 1,494 runs, which earned him his first call-up to the England squad and a coveted place on the Wisden cricketer of the year list.

Compton started to impress at international level during the tour of New Zealand in March, where he scored two centuries.

But a poor home series against the Kiwis - in which he made only 39 runs in four innings - saw him fall out of favour with selectors and Yorkshire's Joe Root took his place as opener in the Ashes against Australia.

And Compton admits his focus has been on England, rather than his county future.

"My mind hasn't really been on it [Somerset], as such," he said.

"I've had my head down trying to focus on, what was at the beginning of the year, an England career.

"Things haven't worked out since then but I'm still trying to give myself the best chance of getting back in. That still remains until the fifth Test - you never know what can happen.

"I just want to make sure the selectors don't forget me."