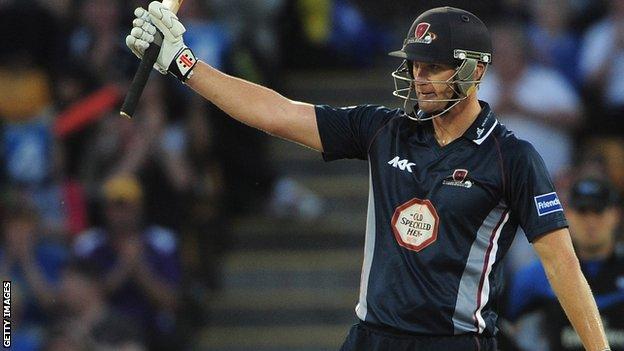 David Willey and Kyle Coetzer put on 89 for the first wicket, before Willey was bowled by Gareth Breese.

That set the stage for White, who hit four sixes under the Wantage Road lights to take the hosts to 183-4.

Cameron White's match-winning 58 not out saw him record his 25th half century in Twenty20 cricket, and his third in this year's FLt20 campaign

The visitors' bid to reach a first Twenty20 semi-final since 2008 got off to a frustrating start, with the first Northants wicket not falling until the 12th over.

By the time Willey's stumps were split by Breese, the left-hander was on 46 and partner Coetzer reached 44 before being run out.

Northants, deprived of top-scorer Richard Levi following his call-up to the South Africa A side, were sitting pretty on 71-0 at the halfway stage and White's third half century of the competition, admirably supported by skipper Alex Wakely's 20, saw the home team to their second-highest total of the season.

Northants have only reached finals day once before, that coming in 2009 when they were beaten by Sussex in the semis

Durham, off the back of a four-game winning run, booked their place in the quarter-finals having totalled a formidable 187 in beating Derbyshire last week.

But this time around they failed to record double figures in any of their first 10 overs, losing Mark Stoneman and Scott Borthwick early, with Mustard showing the firmest resistance before being caught attempting a sweep off James Middlebrook.

Gordon Muchall and Stokes finally sparked a resurgence, smashing 31 across the 16th and 17th overs, with Stokes notching his fourth T20 fifty of the year.

But the charge was too late and their hopes were effectively dashed when Muchall was caught on 29, allowing Northants to march into the last four.