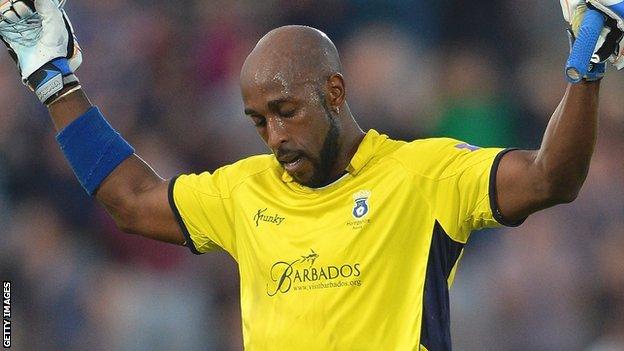 Lancashire's run chase led them to needing four off the final ball, but Gareth Cross could only drive straight for two as they fell short on 201-4.

The visitors, who had only won once in the group stages when batting second, won the toss and captain Glen Chapple decided to insert Hampshire.

Carberry and Vince smashed 72 between them in the six powerplay overs, including 17 runs from the third over and 20 off the sixth.

Vince raced to a 25-ball half century, before holing out to New Zealand international Mitchell McClenaghan on the boundary off spinner Simon Kerrigan.

Sean Erivne skied a Kabir Ali delivery to Stephen Moore at deep cover, but eight runs off the last over ensured Hampshire, who won the tournament in 2010 and 2012, set Lancashire a tough target of 203.

The visitors, who reached the semi-final in 2011, were given a solid start in reply by Tom Smith's 22 from 15 balls.

Lancashire were 51-1 after their powerplay and 101-1 at the midway point of their innings, as Moore (44) and Karl Brown (49) initially kept up with the run-rate.

But two wickets in two balls in the 12th over for Danny Briggs (2-36) changed the momentum.

Brown was bowled one run short of a half century when trying to cut and Briggs then dismissed former Hampshire man Simon Katich for a golden duck.

Liam Dawson took a simple caught and bowled chance to see off Moore as only two runs came from the 15th over.

Steven Croft (43 not out) and Cross (32 not out) hit massive sixes in successive overs to leave Lancashire needing 42 from 18 balls.

A massive straight six from Cross off the last ball of the 19th over reduced the target to 17 from the final over.

Croft and Cross took it to the final ball but Hampshire held their nerve to reach finals day for the fourth time in the tournament's 11-year history.