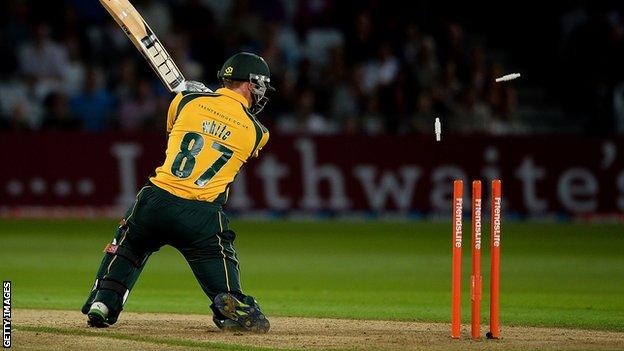 Shaun Tait claimed a hat-trick as Essex crushed Nottinghamshire by 47 runs in a thrilling FLt20 quarter-final.

Chasing 188 for victory, Notts made a blistering start with Alex Hales smashing 31 off 12 balls.

But David Masters then took three quick wickets as the hosts slumped to 64-4 and, despite a valiant 61 from David Hussey, they were dismissed for 140.

Ryan ten Doeschate had earlier bludgeoned 82 from 44 balls as Essex posted 187-6 from their 20 overs.

Neither side have won the tournament before and Esssex have Ten Doeschate to thank for setting up the victory, the Netherlands international smashing the ball to all parts of Trent Bridge in front of a bumper crowd of 12,106.

He could easily have been out lbw to Ian Butler for six when he played around a delivery that seemed destined for middle and leg stump.

But he took full advantage of his reprieve, smashing his 82 off 44 balls before he was caught on the boundary by Jake Ball off the excellent Butler in the final over.

Apart from Ten Doeschate, only Ravi Bopara - who scored a busy 38 off 25 balls made a significant contribution.

And Ten Doeschate's big-hitting, particularly off the spin pair of Graeme White and Samit Patel, ensured Notts had a challenging but very gettable total to chase under the lights.

The Notts reply began in dubious fashion, with Michael Lumb dropped first ball at slip by Mark Pettini off the bowling of Graham Napier.

Opening partner Hales, who was lucky to get away with a poor shot, made the most of his fortune albeit briefly. His 31 from 12 balls included 19 from a Graham Napier over.

When Hales went, caught at midwicket by Greg Smith off David Masters in the fourth over, Notts had reached 46.

Lumb followed in the same over, edging Masters to wicketkeeper James Foster. By then the destructive opening duo had given Notts a fine platform.

But Masters had James Taylor caught on the boundary by Tim Phillips off his third ball, and the Essex total suddenly seemed a daunting one.

And when they reached 100-4 in the 13th over, they were requiring two a ball to make finals day.

Skipper Hussey played sensibly to give the Outlaws hope, but a sensational piece of fielding by Bopara, who flicked the ball back to Phillips on the boundary got rid of Riki Wessels.

And Tait had Hussey, who had twice been dropped, caught and then dispensed with Butler before bowling White.

Essex wrapped up an impressive win and their victory means they join Surrey, Hampshire and Northants in the final day line-up at Edgbaston on Saturday, 17 August.