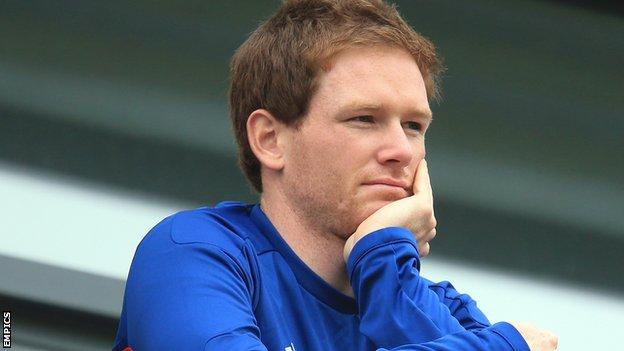 Middlesex batsman Eoin Morgan says his relative lack of four-day cricket should not affect his chances of returning to the England Test side.

The 26-year-old, who made the last of his 16 Test appearances in February 2012, played his first game in this year's County Championship last week.

He told BBC London 94.9: "I have always been one to say the colour of the ball never really changes anything.

"It's about the form you are in, your mindset and how well you are playing."

Middle-order batsman Morgan has scored 700 runs at an average of 30.43 in Test matches, but he has not featured for England in that format since the 71-run defeat by Pakistan in Dubai last year.

However the Dublin-born player is a key member of England's one-day team, having appeared in 102 one-day internationals and 36 Twenty20 Internationals.

Morgan has missed the majority of the County Championship this season after playing for Kolkata Knight Riders in the Indian Premier League, representing England at the Champions Trophy and then spending time on the sidelines with a broken finger.

"I have proved in the past I have come back from the IPL having not played many games, worked hard on my game and gone back into the Test team," the left-hander said.

"It doesn't really particularly bother me. If you feel comfortable within your own game and you are playing well, it shouldn't really matter.

"You ask yourself questions, as everybody does.

"I have come through some challenges over the last 12 months that have maybe changed a few things.

"But you go back to the basics you have been doing since you are 10 or 11 years old.

"It's never boring and I have one of the best jobs in the world and thoroughly enjoy what I am doing. I am loving cricket at the moment."