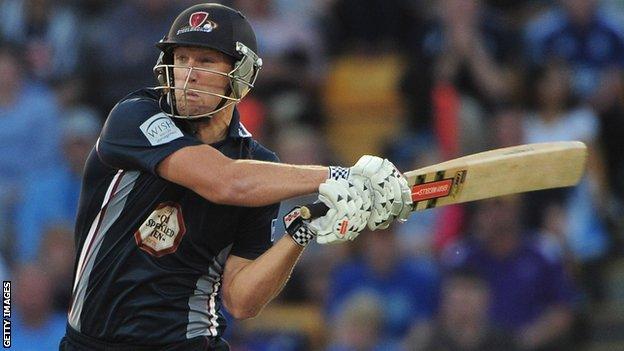 Batsman Cameron White hopes his form for Northants will have caught the attention of Australia selectors.

The 29-year-old, who last played an international game 10 months ago, hit an unbeaten 58 to help

"It's part of the reason being here playing cricket I guess," he told BBC Radio Northampton.

"I desperately want to play cricket again for Australia. I want to put my name forward as often as I can."

He added: "This is why I'm here, trying to win games for Northants and I'll keep pushing my claim."

One-day specialist White has not represented Australia since a semi-final exit at the hands of West Indies in the World Twenty20 last October.

His last Test appearance was five years ago and his most recent one-day international came in April 2011.

He will have hoped that Tuesday's 58, his third FLt20 half century of the season, will have been noticed by Australia head coach Darren Lehman, with two international T20s against England approaching at the end of the month.

But the former Somerset player admitted he is having to manage an ongoing back injury.

"It's been giving me a bit of grief the last couple of weeks," he said.

"I won't be having too many celebratory beers, I'll just take it easy and get back in the pool to see if I can get it right."