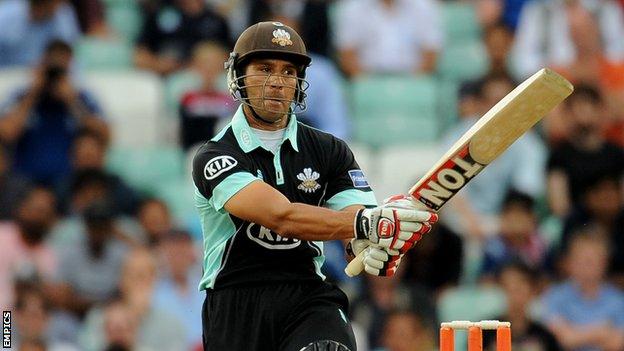 Surrey batsman Vikram Solanki says the side will enjoy their FLt20 quarter-final win over Somerset.

Surrey reached finals day for the first time since 2006 courtesy of a three-wicket win at The Oval on Tuesday.

The 37-year-old told BBC London 94.9: "For us as a club and a group of players, we have worked hard and did deserve to get there.

"It is important to absolutely enjoy events and moments like this and celebrate your wins."

He added: "There are a lot of lows in cricket at times. When you do manage to achieve things like reaching finals day then you have got to enjoy it.

In hindsight, when we do sit down and talk about it, it would have been nice for one of the batsmen to have gone through and got us over the line. But the very fact we have made finals day is outstanding

"All of the guys have worked extremely hard through the group stages and to beat a very good Somerset side is absolutely brilliant."

Surrey qualified for the quarter-final stage after finishing runners-up in the South Group with seven wins from their 10 matches, and the best record of the three second-placed teams.

Udaipur-born Solanki contributed 38 runs from 26 balls to help the side to victory against Somerset with six balls to spare, sealing a place in the last four at Edgbaston on Saturday, 17 August.

Despite praising their all-round team performance, Solanki felt the side could have fared better with the bat.

"The bowlers have been brilliant. Not just at the death, but they have bowled well as a group and we have fielded reasonably well," he said.

"To restrict Somerset, having got off to the start they did with strikers like Kieswetter, to 148 was brilliant.

"Steven Davies and Jason Roy have been very consistent at the top of the order. It can be difficult to be consistent in this format because you are asked to score at such a rate.

"In hindsight, when we do sit down and talk about it, it would have been nice for one of the batsmen to have gone through and got us over the line.

"It would have been better for me, having got myself in, to make sure the side got over the line by being there at the end. Alfonso Thomas had other plans with his yorker but I'd have liked to be there.

"But it's a quarter-final and the very fact we have made finals day is outstanding."