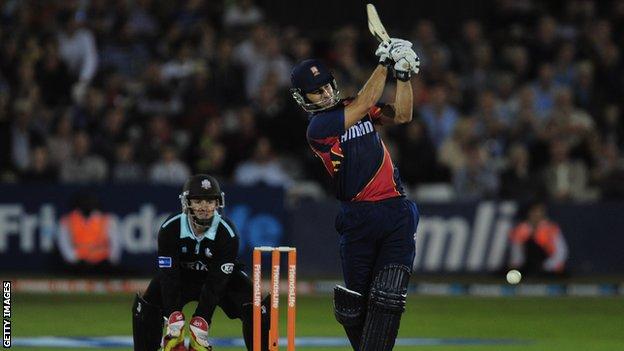 Ryan ten Doeschate has lauded the performances of Essex team-mate Shaun Tait in this season's FLt20.

Tait took a hat-trick in

Having dismissed countryman David Hussey, the Aussie seamer added Ian Butler and Graeme White to take his T20 tally this season to 16 wickets.

"In seven out of 10 T20 matches this season he has just been phenomenal."

Tait's heroics took centre stage at Trent Bridge after Ten Doeschate had earlier led the side to 187-6 after smashing 82 from just 44 balls.

Since being bowled for a duck against Middlesex in early July, the Netherlands all-rounder has not recorded a failure in five matches, scoring at an average of 43 and ending unbeaten three times.

"I've been batting well for three months and just waiting for my chance to play a big knock - it's hard to bat for a long period when you're at number five or six," he continued.

"It's nice to do it in such a big game and, even though I was worried we didn't have a great score, pressure on the scoreboard in these matches is huge and we bowled really well."