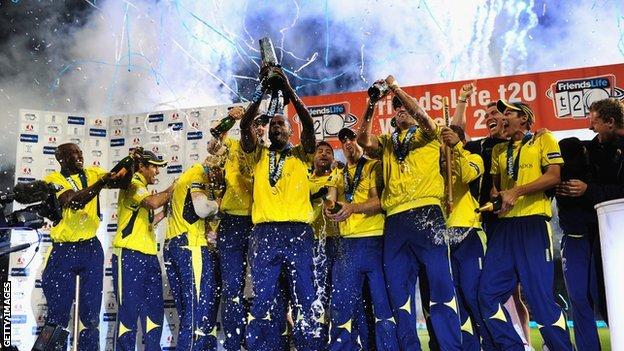 Hampshire team manager Giles White has admitted the county head into FLt20 finals day as favourites but said his side can handle the expectation.

The reigning T20 and YB40 champions sealed their place in a fourth consecutive finals day on Wednesday with a dramatic win over Lancashire.

And White says confidence is high at the Ageas Bowl ahead of next weekend.

"Normally we're not favourites so there is going to be a lot of expectation this time," White told BBC South Today.

"It's unusual (to be favourites). But the players are confident and we will take it game by game. It's about us doing our stuff and playing well."

Hampshire will face Surrey in the last four of the competition at Edgbaston on 17 August while Essex face Northants, who are competing in their first finals day for four years, in the other semi-final.

White paid tribute to his side and said every member of the squad had played a part in their success.

"It's been a strong performance over the past few years," he said.

"The players have played particularly well in this format. It's very exciting. Everyone is playing for each other, it's a very good team effort with everyone contributing, which is great because it's led to a lot of success.

"Every player plays their part, we don't carry anyone. They are all match winners and do their job and never know when they are beaten."