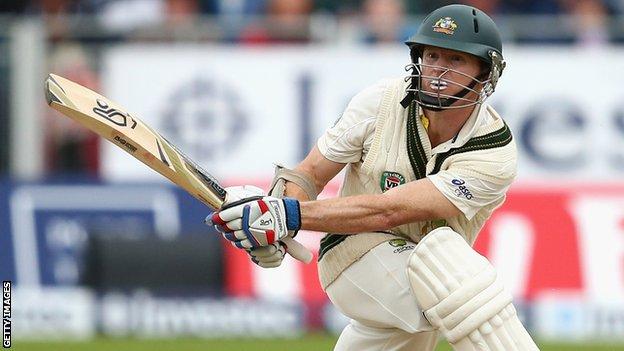 Stuart Broad insists England can take back control of the fourth Test on Sunday morning despite a second difficult day at Chester-le-Street.

Australia will resume on 222-5 as they look to force the win that could get them back in the series.

He added: "The first hour will be very important. If we can get a couple of wickets with the new ball that would put us in a strong position.

"The new ball will naturally do something so we have to make sure it is in a good area. It's fair to say we will concede a lead but that shouldn't scare us as long as it isn't a big one."

Thanks to Broad's explosive burst of three wickets in 27 balls before lunch on Saturday, England had reduced Australia to first 49-3 and then 76-4.

Rogers led a charmed life either side of lunch, playing and missing repeatedly and being dropped by a diving Graeme Swann at second slip when Alastair Cook looked likely to have a far more straightforward catch at first slip.

At 35 years and 344 days, Chris Rogers is the second oldest Australian to score a maiden Test century.

Arthur Richardson holds the record for Australia (37 years, 353 days), and South Africa's Dave Nourse is the oldest from any country (42 years, 295 days).

But he made the most of his second and third lives, his partnership of 129 with Shane Watson dragged the momentum back to the tourists, and although Watson fell late on to Broad, Brad Haddin and the 35-year-old opener saw their side through to an early close.

Broad said: "The wicket seamed around for us in the morning with the harder ball.

"Particularly with Rogers, I got the ball to dart across and it was nice to bowl on. We were disappointed not to get more wickets in that period.

"We put Rogers and Watson down which cost us a few runs - but we stuck to our guns.

"One thing we can't do is chase too much. We have to be very patient on Sunday morning. Australia know they could also build up a decent lead."

Rogers was delighted to finally make his maiden Test century after a journeyman career that has seen him play for four county sides and two state sides.

He made his international bow five and a half years ago but had to wait until this summer for a second cap, and was then stuck on 96 for 20 balls before finally sweeping Swann for the all-important boundary.

He said: "It was a massive relief. It was a nerve-wracking time for a while - I couldn't get the ball off the square. Then I decided to take matters in my own hands by trying a sweep and I got there.

"It is the sweetest moment of my cricket career. After all this time to play and get a Test hundred is very satisfying."