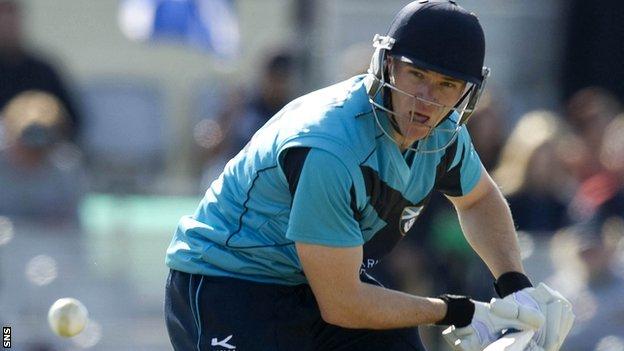 Scotland slumped to another Yorkshire Bank 40 defeat as Group B leaders Durham cruised to victory in Sunday's rain-affected game in Glasgow.

Richie Berrington top scored for the Scots with 39 but the home run rate was too slow to build a defendable total.

Having won the toss and batting first, the Saltires top order all got starts but failed to either push on to a big score or get any momentum going.

Opener Hamish Gardiner and Freddie Coleman took 13.3 overs to compile a half-century stand before Coleman was the first man dismissed, bowled by Gareth Breese for 24.

Another spinner, Scott Borthwick, accounted for Gardiner (23) but Berrington and Calum MacLeod came together in a resolute third-wicket stand.

The scoring rate was still not up to scratch, though, and after a stand of 62 MacLeod was bowled by Ben Stokes for 33, made in 42 balls with three boundaries.

The usually belligerent Berrington found the ropes just once in his 39 before hitting his 62nd delivery, from Paul Collingwood, to Stokes.

The two all-rounders picked up a further wicket apiece, Stokes finishing with two for 22 and Collingwood two for 25, before wicketkeeper Craig Wallace at least gave Scotland's total a late boost with 17 at a run a ball.

Rain restricted Durham's reply to half the standard allocation of overs, and a required scoring rate just above five an over was never likely to test the visiting team.

Captain Stoneman put on 86 in 13.2 overs with wicketkeeper Phil Mustard to take the visitors within sight of victory.

Mustard hit three sixes and a four in his innings of 30, from 38 balls, before being bowled by Moneeb Iqbal - who had Gordon Muchall stumped without scoring two balls later.

But Stoneman reached a 45-ball half-century containing nine fours, finishing 54 not out from 49, and Stokes came in to hit 13 from eight balls, rounding off victory with his second boundary.