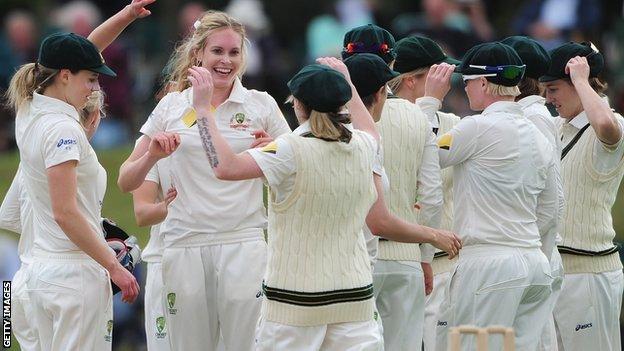 Opener Heather Knight fought a lone battle for most of day two of the Women's Ashes Test as England struggled to match Australia at Wormsley.

Berkshire's Knight made an unbeaten 85 but only Sarah Taylor (33) and Laura Marsh (13 not out) offered support.

Off-spinner Erin Osborne took 3-31 as England finished the day on 172-6, needing 10 more to avoid the follow-on.

"We saw some great momentum from Australia - Ellyse Perry batted at a very good pace. They bowled very straight, got lbws and really squeezed England as they lost the big guns up front. If they want to stay in this game, England need to find a way to score some runs, rather than prodding and poking as they did today."

Earlier, Sarah Elliott (104) reached her century and some quick runs allowed the Southern Stars to declare at 331-6.

Elliott, who began the day on 95, took eight overs to score the five runs she needed for a maiden hundred on her return to international cricket, nine months after giving birth - with her husband and baby son watching from the boundary.

But when she was caught by Lydia Greenway at point off seamer Anya Shrubsole (2-57), it was the cue for Australia to accelerate and although Alex Blackwell fell for 54, Ellyse Perry smashed a rapid 31 not out from 24 balls to set up the declaration before lunch.

Perry made Australia's first breakthrough in the afternoon, having Arran Brindle lbw, but after Knight and Taylor had added 44, the introduction of 17-year-old pace bowler Holly Ferling proved a masterstroke by skipper Jodie Fields.

Ferling (2-40) picked up the prize wickets of Taylor and Charlotte Edwards in her first four overs, having Taylor caught at square leg off a bouncer and trapping captain Edwards lbw.

But Marsh dug in well to support Knight for the last two hours of play as they added an unbroken 59 for the seventh wicket, with Marsh taking 114 deliveries to make 13.

Knight said: "I decided to concentrate on what I was doing at my end and not worrying too much about the wickets we were losing.

"However, we still need 10 more to avoid the follow-on so that is our first objective, and then there's the new ball in six overs, so hopefully that will bring a few more runs."

The Women's Ashes will be decided by all three formats of the game. Australia hold the Ashes after winning the last Test at Sydney in January 2011.