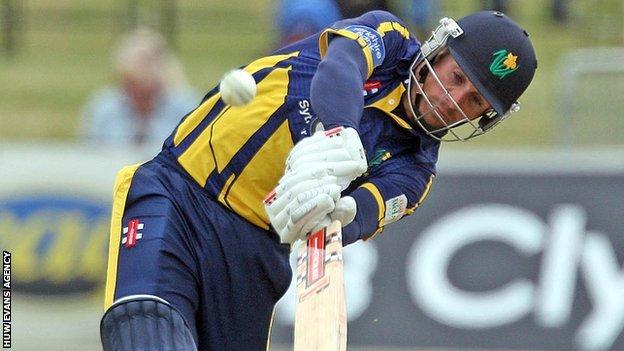 Mark Wallace's swashbuckling 70 off 57 balls ensured that Glamorgan beat Somerset by one wicket in their Yorkshire Bank 40 match in Cardiff.

Glamorgan won the toss and put Somerset into bat, with Michael Hogan's 4-34 helping limit the visitors to 222-8.

Glamorgan's run chase faltered as they lost five wickets for 20 runs, but Hogan and Simon Jones saw them home.

With the scores level going into the final over, former England paceman Jones struck a four to seal victory with three balls remaining.

Somerset remain top of Group C but Glamorgan's victory catapults the Welsh side into second place in the table, just ahead of Middlesex and Gloucestershire on run rate.

"Despite panic setting in as Glamorgan neared their target - five wickets falling for just 20 runs - a boundary from Simon Jones with just three balls left gained them a very important victory.

"They were given a great start with Mark Wallace striking 70 from 57 balls and sharing a partnership of 116 with Chris Cooke who made 44.

"Captain Marcus North then scored a cultured 38 before the wickets began to tumble and Glamorgan were then indebted to the last pair of Jones and Michael Hogan who got the last 11 runs."