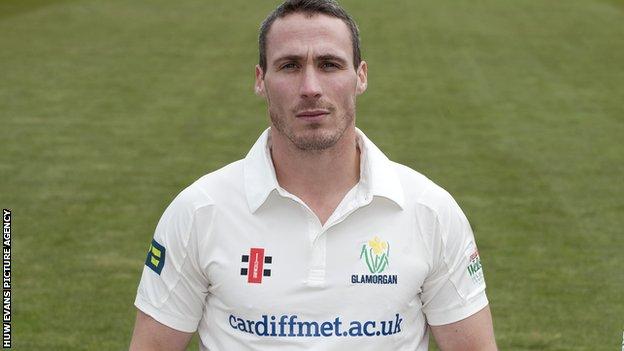 Bowler Simon Jones says Glamorgan's fate in the Yorkshire Bank 40 is in their hands after their victory over Somerset in Cardiff.

The former England international hit the winning four for Glamorgan to seal a one-wicket victory with three balls remaining on Monday.

The Welsh county moved into second place in Group C and face Middlesex at home on Wednesday.

"Somerset are top of the league and we have just beaten them," said Jones.

It is in our hands, we have got four games left and we have to try and win as many as we can just to stay in contention to be in the quarter-finals.

"It is in our hands, we have got four games left and we have to try and win as many as we can just to stay in contention to be in the quarter-finals.

"With the side we have got and the way we are playing now, we can take massive promise from this game."

Mark Wallace scored 70 off 57 balls after Glamorgan had limited the visitors to 222-8 and the home side went on to win by one wicket at the Swalec Stadium.

Glamorgan's run chase faltered when they lost five wickets for 20 runs, but Jones sealed the win when he hit a four in the final over.

The Welsh county play Middlesex and Gloucester next, both just below Glamorgan in the table.

Jones, 34, who is out of contract with Glamorgan at the end of the 2013 season, believes his side's victory over Somerset has to give them confidence with four games of the competition to play.

"We have beaten the top of the league boys and they are a very good side," said Jones.

"It shows the ability we have in our squad and I am really looking forward to Wednesday.

"This is why we play the game. It's tough and if you want to get in the top two, we have to beat the other teams.

"Middlesex are a very good side but we have momentum now from this win.

"We know how well we can play and the boys are batting well and we are bowling well as a group. We are feeling well and very confident going into Wednesday."