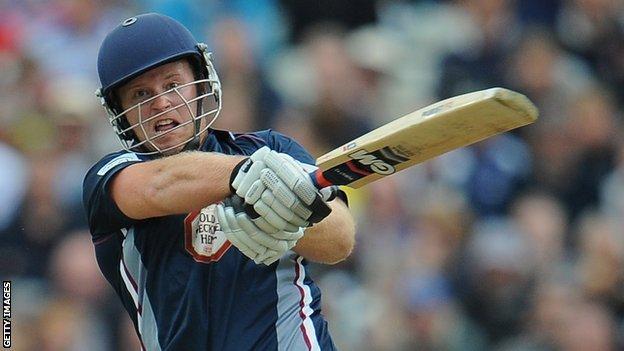 Richard Levi struck a brutal 57 to help Northamptonshire into the FLt20 final with a seven-wicket win over Essex.

Chasing 169 to win, he shared 74 with Kyle Coetzer (18) for the first wicket to give the Steelbacks a platform.

Steven Crook added 46no as they reached their target with 11 balls left.

Only some late fireworks from Graham Napier (38 off 15) ensured Essex reached a competitive 168-5, but it was not enough and Northants will now face Hampshire or Surrey in the final.

It will be their first final appearance, having only reached the last four once previously, losing to Sussex in the 2009 semi-finals.

And while Northants may have been the surprise package of this year's Twenty20 competition, their victory was well deserved and owed to several fine performances.

Levi's 57 off 35 balls, including four fours and four sixes, had put them in a strong position, but once his opening partner Coetzer was caught by Ravi Bopara off the bowling of Reece Topley for 18, the runs began to dry up.

Topley had the South African snaffled by Hamish Rutherford two overs later and when Alex Wakely was caught and bowled by David Masters with the score 93-3, the momentum was beginning to shift.

But Crook put on an unbroken partnership of 78 with Cameron White (36 not out) to help the Steelbacks home with room to spare.

Earlier, opener Rutherford hit 36 off 19 to get the Essex innings off to a decent start, having been dropped by White at slip on naught.

But, despite Mark Pettini (27), Ravi Bopara (14) and Ryan ten Doeschate (13) all providing contributions, the Eagles lost wickets at regular intervals - Muhammad Azharullah's 2-38 expensive but including the crucial scalps of Rutherford and Ten Doeschate.

Napier's eye-catching late cameo of 38 off 15 balls, which included three fours and three sixes, restored hope for Essex but Northants were able to reach the final thanks to the highest successful run chase in T20 finals day history.