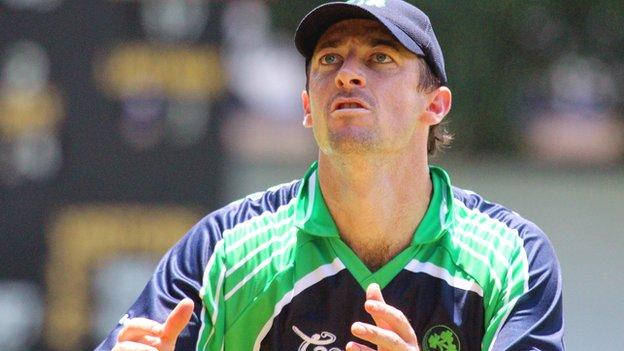 Ireland all-rounder Alex Cusack will miss next month's ODI against England at Malahide because of a back injury.

Cusack has been rested from both domestic and inter-provincial duty in recent weeks, but will not be fit in time to face the Ashes winners.

"It's disappointing for Alex to miss the game as he's an important player for us, particularly in the powerplays," said coach Phil Simmons.

"We've strength in depth and it will give someone else a chance to shine."

He added: "We are blessed with a number of very talented all-rounders so have plenty of cover in that department."

The 32-year-old played a pivotal role during Ireland's 2011 World Cup win against England in Bangalore.

He scored 47 in a sixth-wicket stand of 162 with Kevin O'Brien as Ireland pulled off the greatest shock in World Cup history.

Cusack is one of the most experienced players in the Ireland set-up, having played 138 games since his debut in 2007, taking 141 wickets and scoring 2,205 runs.

With the England game now just three weeks away on 3 September, Simmons admits to a feeling of excitement in the Ireland camp.

"We've seen just how well the tickets have gone with over 7,000 sold already," he said.

"It's going to the biggest match ever held in Ireland, and there will be a fantastic atmosphere at the new international venue at Malahide.

"It's my home town and I know just how much of a buzz there is around the place to have the Ashes winners coming here.

"It'll be a magnificent occasion, and hopefully we'll give the Irish fans another day to remember."