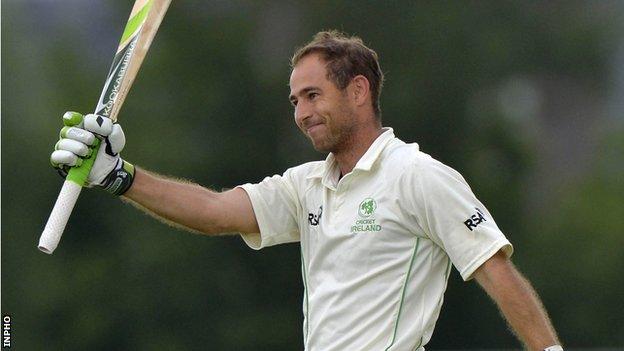 Leinster Lightning wrapped up victory against the North West Warriors with more than a day to spare in the latest Inter-Provincial clash at Bready.

After bowling out the Warriors for 164, Leinster had finished day one on 171-3.

John Anderson went on to score 91 with Simmi Singh on 76 before Leinster declared on 267-8.

NW hit 173 in their second innings with Max Sorensen completing a seven-wicket haul and Leinster reached their target of 73 by losing only three wickets.

Resuming seven runs ahead overnight, Anderson and Singh extended their fourth-wicket partnership to 138, before Gareth Burns dismissed both in quick succession.

Warriors skipper Andy McBrine then claimed three wickets in quick succession on the stroke of lunch which prompted a declaration from Leinster at 267-8, content with a 105-run advantage.

Sorensen (3-34) claimed the wicket of David Rankin in the first over, but stubborn innings from Jason Milligan (43) and skipper Andy McBrine (48) looked as if the game would be taken into the final day.

However the dismissal of Johnny Thompson by John Anderson (3-4) sparked a collapse which saw the last five Warriors wickets falling for just seven runs in a six-over spell.

That meant a victory target of just 71 for Leinster, who thanks to Ben Ackland (28) and John Mooney (18 not out) got there comfortably after claiming the extra half-hour available to gain a result.

The final game in the Championship takes place at Waringstown on 27-29 August, while the Series concludes at Strabane on 29 September, when a Leinster Lightning win over the Warriors will complete a clean sweep of all three available trophies.