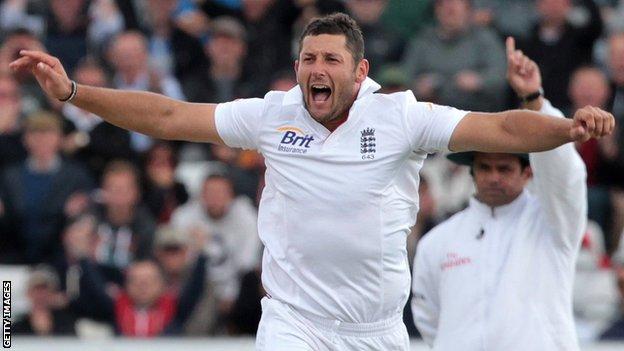 England and Yorkshire pace bowler Tim Bresnan will miss the rest of the summer through injury.

The England and Wales Cricket Board said the player, 28, has a stress fracture in his lower back.

Bresnan has played in the last three Ashes Tests for England but will not feature in the fifth Test at The Oval.

The ECB added: "Bresnan will begin a recovery and rehabilitation programme and a date for his return to cricket will be determined in due course."

He later tweeted: "Really gutted to be missing the last test! Wishing the boys well for the Oval."

Bresnan missed the first Test of the Ashes series but came in for Steven Finn for the second Test.

The Yorkshire pace bowler then retained his place as Alastair Cook's side went on to win the Ashes.

Bresnan has taken 10 wickets in the three Tests he has featured in and averaged 25 with the bat.

England batsman Kevin Pietersen has had a scan on his right knee but is available to be selected for the fifth Ashes Test at The Oval on 21 August.