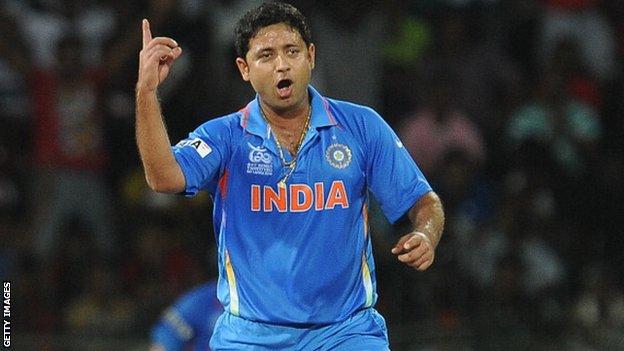 India leg-spinning all-rounder Piyush Chawla has signed for Somerset and is expected to make his debut within days.

Chawla has yet to be issued with a visa in India but Somerset are confident the matter will be swiftly resolved.

The 24-year-old has been signed as Somerset's overseas player to replace Abdur Rehman, who has recently been called up by Pakistan.

He has a great work ethic, real skill and I know he will add real value to our team

"I am delighted to get the chance to play county cricket for Somerset," Chawla said.

Chawla, who had a brief spell in England with Sussex in 2009, has played in three Tests, 25 one-day Internationals and seven Twenty20 internationals.

He added: "I have heard a lot about Somerset and I look forward to taking as many wickets as I can for the county during my stay with them."

Somerset are confident Chawla's paperwork will be issued in time for him to play in the County Championship match with Warwickshire, which starts on Tuesday, 20 August. He will remain with the club until the end of the season.

Somerset director of cricket Dave Nosworthy said: "We are delighted to have signed Piyush Chawla as a replacement for Abdur Rehman, who, as we know, has been called up to represent Pakistan in Zimbabwe.

"It has not been easy to find a replacement at such short notice due to so many players being committed elsewhere in the world. However, we have been extremely fortunate to pick up a quality player like PC and are thrilled.

"I have personally worked previously with PC and he has a great work ethic, real skill and I know he will add real value to our team in the last five Championship matches, which we all know are crucial for us."