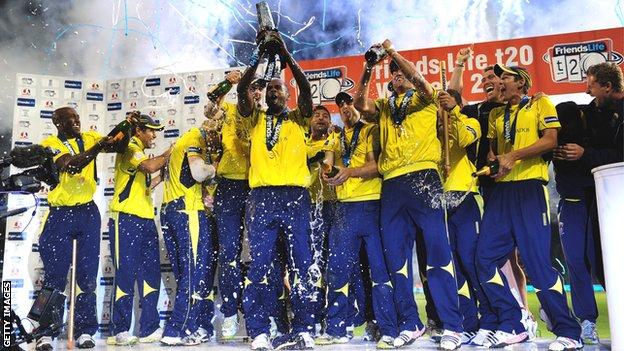 Hampshire batsman Michael Carberry says the side are desperate to send captain Dimitri Mascarenhas off in style on FLt20 finals day on Saturday.

Mascarenhas, 35, retires at the end of the season and will be making his final Twenty20 appearance for the club.

The all-rounder has been with Hampshire for 18 years and Carberry wants to mark his service by retaining the trophy.

"It will be good to give Dimi a really nice send off," the opener told BBC Radio Solent.

Hampshire have won silverware on five occasions during Mascarenhas' time on the staff and he is eager to win one more trophy at Edgbaston.

They take on Surrey at 14:30 BST in Saturday's second semi-final, with the winners to face Northants or Essex later in the day.

"It's huge, the biggest weekend on the calendar and we cannot wait," said Mascarenhas. "One of four teams can win it and we hope it will be us.

"We always get a good following, and hope a lot will make the journey to support us. The boys are absolutely desperate to win and we are going to do everything we can to win."

No team has lifted the trophy two years in a row and Carberry, who needs just 22 runs on finals day to become this summer's highest scorer in the game's shortest format, says that is huge motivation for the team.

"This one will be the big one as through history no one has retained their crown, and to achieve that will be massive for us," he said.

"From a professional point of view it would be a brilliant way to cap off a unbelievable campaign. We have worked really hard, and we've come back a stronger unit than we were before."

On the prospect of surpassing Somerset's Craig Kieswetter, who scored 517 runs in the competition, Carberry added: "It's been a great run for me.

"I have capitalised on some really good form, I'm looking forward to the final and hopefully I can add a few more."