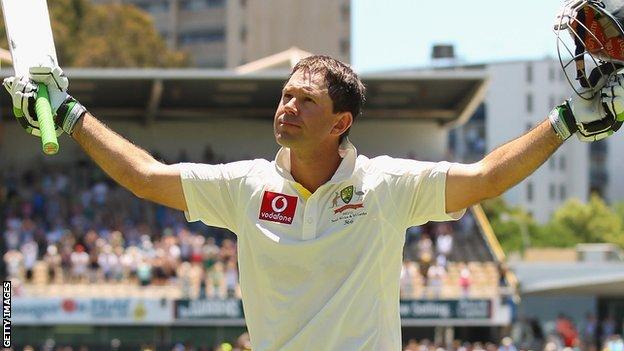 Australia have passed 300 only once in eight innings during the Ashes series, in which England are 3-0 up with one Test to play.

The final Test at The Oval begins on Wednesday.

Ponting said: "We've got to identify the best players, give them an opportunity, and stick with them, even if we're losing."

Shane Watson, 32; Usman Khawaja, 26; Steve Smith, 24; Ed Cowan 31; and Phil Hughes, 27, have all struggled for runs during the series and Australia coach Darren Lehmann said: "The blokes have to learn. If they don't, we'll find blokes that will."

But Ponting, 38, who retired from international cricket in 2012 after scoring 13,378 runs in 168 Tests, responded: "You can find some excuses for a few of the guys - young players trying to find their way in the most pressurised series that there is in world cricket.

"If you take England back six or seven years when they had Ian Bell and Alastair Cook just starting out - those guys weren't overnight successes."

Ponting believes Hughes, Khawaja and Smith, who have just 46 Test caps between them, would benefit from an extended run in the side.

But in 17 completed Ashes innings this summer, the three have scored a total of 397 runs at an average of just 23.3.

Ponting said: "If they're the best players we've got, they've got to learn and grow some confidence in that environment, not be in and out of the team all the time.

"There's some challenges there for Australian cricket but, with Darren Lehmann's appointment as coach, and some of the younger guys they've got, I think there's enough talent.

"They're just going to have to learn and, unfortunately at the moment, they're learning the hard way."