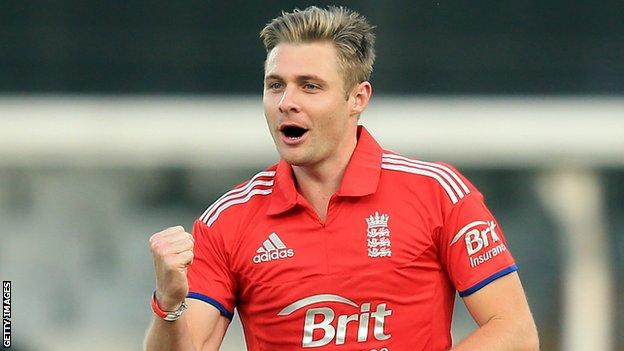 Sussex's Luke Wright is relishing the challenge of captaining the England Lions side for the first time.

The 29-year-old all-rounder will lead the Lions in three one-day matches against Bangladesh A this week.

He told BBC Sussex: "I've played quite a lot of white-ball cricket so I have my own ideas on things so hopefully we can get three wins out of it.

"It's a huge honour. It's something that you'd never turn down if you get it put on your plate."

Wright, who has played 46 one-day internationals and 44 Twenty20 games for England, will lead a Lions side which includes Hampshire batsman Michael Carberry, Warwickshire paceman Boyd Rankin and Northants all-rounder David Willey, whose hat-trick in the final against Surrey sealed victory in Saturday's FLt20 final.

"I think I got more texts about captaining the Lions than playing for England," Wright added.

We are so pleased for Chris to be rewarded. He has put in so much effort, bowled so many overs for us and done brilliantly

"I haven't been captain probably since I was about 15 for Leicestershire Under-15s.

"It's lovely for me and my family, especially to captain such a talented bunch of players who will be there.

"I am looking forward to it and it is a chance to impress as well, with Ashley Giles being coach."

The Lions play Bangladesh A at Bristol on Tuesday and then at Taunton on Thursday and Saturday and Wright is concerned that his side do not underestimate their opponents.

"Any time you are in front of the England selectors you are always up against good players," he added.

"Bangladesh are one of those sides who have shown how dangerous they are.

"It's up to us to firstly go and win the games. You naturally do well individually if you do that."