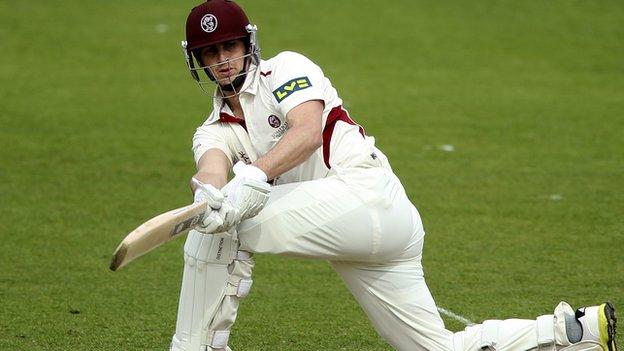 Somerset batsman Craig Kieswetter got away with an early missed chance as he dominated the first day at Edgbaston with a century against Warwickshire.

The hard-hitting England one-day wicketkeeper was dropped at slip off Rikki Clarke on 22 by stand-in Bears skipper Varun Chopra.

But he made 148 as Somerset were bowled out for 340, Keith Barker and Jeetan Patel each taking three wickets.

Warwickshire then survived one George Dockrell over to close on 0-0.

Following a late start at noon due to the previous night's floodlit YB40 derby clash between Warwickshire and Worcestershire at Edgbaston, the day got off to a bizarre start.

Warwickshire skipper Jim Troughton made a late withdrawal, his absence handing the captaincy to Chopra, a fifth change to the team battered by 140 runs the night before in the YB40 by their local rivals.

Ian Westwood, Rikki Clarke, Keith Barker, Tim Ambrose and Recordo Gordon all returned, while Chris Woakes, who is away with the England squad in London ahead of the fifth Ashes Test at The Oval, has been nominated to play should he not be required against Australia.

With Chris Wright and Oliver Hannon-Dalby sidelined for the season, Boyd Rankin called up by England 'A', and Ian Bell and Jonathan Trott on Test duty, William Porterfield was named as 12th man.

But when Troughton withdrew, Warwickshire turned to veteran all-rounder Darren Maddy rather than call up Porterfield.

Maddy had to be recalled from second XI duty at Coventry to make only his second County Championship appearance of the season, with Porterfield actually starting the match on the field as 12th man.

By the time Maddy arrived, after being stuck in traffic, the Bears had already made a double breakthrough, before getting the still prized wicket of Marcus Trescothick for 46 prior to lunch.

Kieswetter's escape straight after the interval then took the game away from the hosts as he shared key stands of 89 with James Hildreth, for the fourth wicket, and 119 with Alex Barrow (43) for the fifth.

But, despite Clarke and Barker both having to undergo treatment for ankle injuries, the Bears battled back well in the final session to bowl out the visitors.