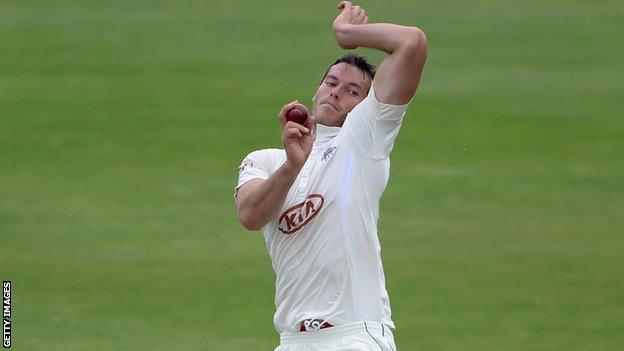 Having been surprisingly overlooked by England for the final Ashes Test, Tremlett bowled Matthew Stoneman with the 11th ball of the match.

Borthwick and Will Smith (87) produced the day's major partnership, adding 183 before Tremlett had Smith lbw.

With many pundits questioning his exclusion from the England team against Australia, Tremlett's best figures of the summer provided the perfect start to his attempt to secure a place on the plane for the winter tour to Australia.

While Chris Woakes, as well as spinner Simon Kerrigan, continued to endure difficult Test debuts almost 300 miles away to the south, the economic Tremlett looked the class act of a Surrey attack which conceded 36 boundaries to Borthwick and Smith in their free-flowing stand.

As Durham headed towards a dominant position on 260-2 with 15 overs of play remaining, Tremlett then utilised the second new ball superbly.

He struck Smith in front, tempted Michael Richardson to feather behind and ended Borthwick's career-best innings to drag relegation-threatened Surrey back into the game before Paul Collingwood and nightwatchman Jamie Harrison blocked their way to the close.

"This was a great toss to lose for Durham who for the first time this season were batting first at home.

"Scott Borthwick's fourth first-class 100 helped him share a Durham record for the third wicket against Surrey with Will Smith.

"But Borthwick went four overs from the end as Chris Tremlett took his first five-for in the Championship for Surrey."

"He got bounce and movement throughout the day and thoroughly deserved his wickets.

"Durham will be the happier of the two sides and Surrey know they have to take quick wickets tomorrow morning."